The Maryland Farm Bureau Annual Convention and Meeting of Delegates and CyberAg Symposium was held last week in Cambridge, Maryland. 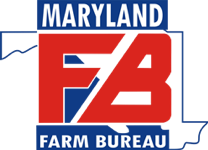 The first CyberAg Symposium held with the convention, was held pre-conference and addressed being prepared for growing threats with cybersecurity, even in the ag community.

But I have hope for the future because Farm Bureau members are resilient as we grow a safe and sustainable food, fiber and fuel supply and put in the time to create the policies that will help us grow a better tomorrow.

The Maryland farming community reunited and learned from high-profile guests, and about current issues, such as the The Center for Food Integrity and the next U.S. farm bill. The Maryland Farm Bureau Annual Convention and Meeting of Delegates and CyberAg Symposium was held last week in Cambridge at a new venue accommodating their large turnout this year.

Highlights included adopting and updating policy, recognizing members’ achievements on the state and national level, networking over awards presented, and the election of officers.

Among the keynote speakers, American Farm Bureau President Zippy Duvall said, “In my travels across our great land, I have seen farmers’ and ranchers’ dedication to their farms and communities. I have also seen the challenges we face across farm country, from natural disasters to government regulation and everything in between. But I have hope for the future because Farm Bureau members are resilient as we grow a safe and sustainable food, fiber and fuel supply and put in the time to create the policies that will help us grow a better tomorrow.”

The first CyberAg Symposium held with the convention, was held pre-conference and addressed being prepared for growing threats with cybersecurity, even in the ag community.

“The Maryland Farm Bureau Cyber Sunday event allowed us to fulfill our mission of outreach, awareness and education to the food/ag supply chain about cyber threats,” said Andrew Rose, managing director of CyberAg. “Attendees learned who the ag adversaries are, what they want, how they attack, how to mitigate/respond, and what threats are coming next. Because of the help and support of the Maryland Farm Bureau, the level of cybersecurity awareness has been raised in the agricultural community.”

Awards
For the first time, both a male and female Ag Ambassador were chosen in place of the past Miss Maryland Agriculture scholarship program. The winners are Jaclyn Bryant, Frederick County (sophomore at Frederick Community College), and Xavier Cox, Prince Georges County (junior at University of Maryland Eastern Shore).

Bob Tibbs, Harford County Charolais producer, received the Distinguished Service Award for his lifetime of achievements, awards and service, including being named a Harford County Treasure. The Agri-Woman of the Year award went to Evelyn Wilcom, Monrovia dairy farmer and retired nurse, for her over 60 years of service to the Farm Bureau and numerous other organizations.

The Young Farmers’ competition is a highlight that showcases the upcoming generation of farming leaders. Winners are:

In another first this year, the Leopold Conservation Award was awarded to a Maryland farm or landowner, with the winner announced at the convention. Persistence Creek Farm and the Warring family of Faulkner won the honor in Maryland’s inaugural year.

Every two years, the American Farm Bureau Federation bestows upon select members of Congress recognition to those who work tirelessly to support the interest of farmers across the country and rural America. Senator Chris Van Hollen was one of seven members of Maryland’s congressional delegation to receive the Friend of Farm Bureau award for the 116th Congress. His award was presented in person during the convention.

On the state level, new policies were introduced on cyber-ag security for the food chain and on urban agriculture. The Maryland Farm Bureau supports research and implementation of cyber-ag security programs to protect local and state supply chains.

The association bolstered its support of urban agriculture by adding policies, such as modifying zoning laws, grants, training programs and use of Open Space funds. The details can be found here.

Elections
The following Maryland Farm Bureau officers and district directors who were up for re-election to the state board of directors won their respective elections:

Ed Heikes of Talbot County was elected to serve on the MDFB Political Action Committee.

Another pre-conference event was the Womens’ Leadership Committee meeting, where they added a new position and elected Connie Palmer of Frederick County as its second vice president.

MARYLAND FARM BUREAU®, INC. is a 501(c)(5) federation that serves as the united voice of Maryland farm families. Our organizational strength comes from the active participation of over 10,000 individual and family members who belong to the state’s 23 local county Farm Bureau organizations. Since 1915, Maryland Farm Bureau has been committed to protecting and growing agriculture and preserving rural life. Maryland Farm Bureau is a proud member of the American Farm Bureau® Federation. Learn more at MDFarmBureau.com.