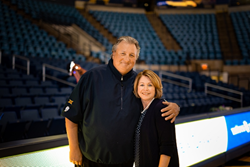 Sleep Outfitters and Mattress Warehouse founder Kim Knopf, a 2011 West Virginia Business Hall of Fame inductee, said, “I started this company with one store in South Charleston in 1983. As a West Virginia-born company, we are proud and pleased to be the official sleep providers of WVU Athletics.”

Of Mattress Warehouse’s and Sleep Outfitters’ 160 stores, 21 are in West Virginia where the company began.

“We are excited about the enhanced partnership between Sleep Outfitters and Mattress Warehouse, WVU Athletics and Mountaineer Sports Marketing,” said Matt Wells, WVU’s Senior Associate Athletic Director for External Affairs. “We appreciate the support of Kim Knopf and her talented team and look forward to working more closely with them in the coming years.

Knopf says the company also plans to give away a pair WVU season football and basketball tickets.

“Sleep Outfitters and Mattress Warehouse deliver mattresses to more than 100 universities during the back-to-school period,” said Knopf, “so our association with WVU and other schools is a natural one.”

“Being in the mattress business, our association with WVU athletics also helps us make the point that regular, restorative sleep is critical for productivity on the field, on the court and on the job,” she said.