Singer-songwriter Mauve performed for the Acoustic Showcase at the 4th Annual The Music Expo. 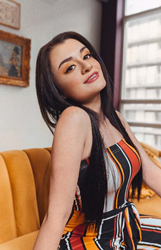 “Playing piano, guitar, composing, writing lyrics, and (for our greatest pleasure) singing with charisma, MAUVE is remarkable for her several musical skills."

Celebrating music and the music industry is a passion for the city of Mississauga, and for Mauve. Recently, she was chosen by the organizers to be featured at the Acoustic Showcase at the 4th Annual Toronto Music Expo.

Mauve's choices for her performance spoke to the connection one feels when someone special to you, is away from you. The listener can almost feel the longing, emotional influences she renders while she sings her songs.

“Playing piano, guitar, composing, writing lyrics, and (for our greatest pleasure) singing with charisma, MAUVE is remarkable for her several musical skills. Plus, nowadays even more important than artistic talent, MAUVE has this entrepreneurial mind-set to drive her far on the path to success. This young artist from Missisauga builds her musical identity step-by-step with charm and perseverance. First recording covers from various music genres as pop, rock or jazz, she got inspired by the iconic Sia, Arctic Monkeys and Amy Winehouse. When she finally launched her own sound a year ago, she turned to electro-pop soundscapes.” - Musical GlobeTrotter

While growing up, Mauve was constantly inspired by theatrical performances, turning her towards the keys of her piano to bring forth the passion of those theatrical performances into her life. From the age of 14, Mauve has worn her heart on her sleeve as she learned to play and write her own songs. If one were to ask singer-songwriter Mauve how she feels about creating music, she says it has the ability to take one to an altered reality.

Mauve won the 2019 InterContinental Music Award for Best of North America-Pop for her song, “Come Around”. In addition, Mauve was nominated for “Best New Artist” at the 2018 Niagara Music Awards. She has also been honored by a number of internet radio stations, with features in their programs, including interviews. Some of the stations her songs have been played on are 107.3 Virgin Radio, CBC Music, IndieCan Radio on SiriusXM.

Mauve has a certain edgy ability to bring forth complex emotions through the lyrics of her songs. In her live performances she has a natural ability to inspire positive energy on stage, moving her listeners with the sensational beauty of her voice. She gives credit to Toronto for providing many musical outlets and for providing her with many opportunities to explore different styles of music through a vibrant diversity of people.

Mauve is Toronto's up and coming pop songstress who has an eclectic and playful sound that touches your soul. Mauve transcends genres to bring you feel-good tracks with hints of RnB through Tropical House and EDM production. Her songs have gained over 400,000 streams and counting on Spotify. She’s an energetic, engaging and passionate performer. Audiences loved her in 2019, as she performed at over 30 shows across Ontario. One of these shows included a headlined performance at Toronto Pearson Airport for YYZ Live which you can see in this press release.