Maybe Now Christians Will Stop Bickering Over the Gift of Tongues 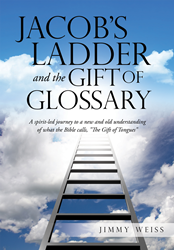 What motivated me more than anything, was the revelation that the greater gifts depend on and build upon the lesser gifts!

As a dedicated apologist, Weiss was troubled by the amount of controversy surrounding the gift of tongues. While some consider it the ability to magically speak in a foreign language, others see it as senseless babbling. Weiss was not satisfied by either of these explanations, and followed the Holy Spirit on a search for a better one. His solution is both practical and biblical, and he hopes it will help believers move past this obstacle.

Jimmy Weiss turned to Christ as an alternative to suicide in 2004, at the age of twenty. After a marvelous early period of belief, the Lord launched Jimmy into a life of rigorous study of the Bible and its ideas. Weiss holds a Bachelor of Science in Business Administration from Rogers State University and has been blessed with a wife and two children.

Xulon Press, a division of Salem Media Group, is the world’s largest Christian self-publisher, with more than 15,000 titles published to date. Jacob’s Ladder and the Gift of Glossary is available online through xulonpress.com/bookstore, amazon.com, and barnesandnoble.com.