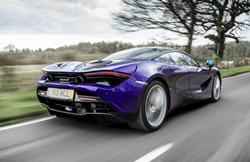 The 2020 McLaren 720S, with its sleek design, powerful engine and numerous performance-enhancing features, is now available at McLaren Chicago.

The 2020 McLaren 720S has a stunning design. Along with curves and contours that create the distinctive McLaren look, the design of the McLaren 720S was inspired by the sleekness and hunting efficiency of the Great White Shark. The unique twin-hinged dihedral doors make the supercar stand out even more, while the MonoCage II carbon-fiber passenger cell is high-strength and lightweight, resulting in excellent driving dynamics and superior protection.

The 2020 McLaren 720S is powered by a robust 4.0-liter V8 engine. With its electrically-actuated twin-scroll turbochargers, it churns out an impressive 710 horsepower and 568 pound-feet of torque. The engine is mated to the quick and efficient 7-speed + reverse Seamless Shift Gearbox. The McLaren 720S can reach a top speed 212 mph and achieves the 0 – 100 kph (62 mph) sprint in only 2.9 seconds.

For additional information about the 2020 McLaren 720S and other models at McLaren Chicago, automotive shoppers can visit the dealership’s website at http://www.mclarenchicago.com or call (312) 635-6482.