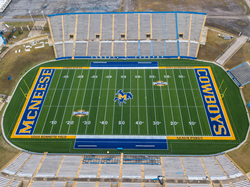 Considering the shape the site was in, we couldn’t be more pleased with AstroTurf. Win or lose, having the team play and the fans come out with that gameday excitement has been such a boost to our community

On August 27, 2020, the deadly Category 4 Hurricane Laura made landfall in Louisiana, the strongest storm to hit the state since 1856 with sustained winds as high as 150 mph and gusts reaching 180 mph. Much of the city of Lake Charles and McNeese State University was damaged or destroyed. Nearly a million people in the Gulf Coast region lost electricity and more than 1.5 million residents were ordered to evacuate.

Six weeks later, on October 9th, Hurricane Delta slammed into the same area, causing more destruction. The football field was underwater twice in less than two months. Keeping the previous turf was not an option.

TJ Marcum, a regional sales manager for AstroTurf, had spent five seasons as an assistant coach at McNeese State and had a special interest in the project. “It really hit home for me,” Marcum said. “The first hurricane devastated the area. They were starting to get things cleaned up when the second one came through and caused even worse damage. In October it looked like a war zone.”

AstroTurf came on board at a time when production usually slowed for the holidays, but the Cowboys were without facilities to train for the opening of the 2021 spring season and needed their home. The legendary AstroTurf quality control protocols and industry-leading R&D efforts made the Rhino Series a good choice for a team that wanted to increase the playing time and performance of their sports field. As the stadium whipped into shape, the team stayed in local hotels and trained at a local high school.

“AstroTurf was such a blessing,” said Tanner Stines, Senior Associated Athletic Director. “From the time the contractor and TJ Marcum got together, from the art layout, picking the colors, to the installation, it was second to none.”

The “never say die” Cowboy spirit drove the entire project to completion. Cowboy Stadium, with a 17,410 capacity, plays a vital role in the community. By the second week of January 2021, the Cowboys were back in their own facilities with new AstroTurf under their feet. “We were able to get the turf done – our guys were ready to go and the field just looks great,” said TJ Marcum. “It was a great process.”

With head coach Frank Wilson at the helm and AstroTurf on the field, the Cowboys overcame every obstacle in their way – a global pandemic, two major hurricanes, and a team without a home or facilities for five and a half months. The Division I Football Championship Subdivision powerhouse consistently leads the Southland Conference in attendance. They hold the league record with 16 FCS playoff appearances and are on an FCS-record streak of 15 consecutive winning seasons.

“The two hurricanes really hit us on the chin,” said Tanner Stines. “Considering the shape the site was in, we couldn’t be more pleased with AstroTurf. Win or lose, having the team play and the fans come out with that gameday excitement has been such a boost to our community.”