Powering Cities of the Future, Today 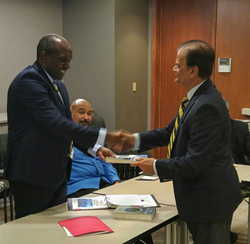 MMTC is a 100% green city and is currently in the Final Phase 3 of development, set to complete in 2020. It will be home to 4,800 affordable green residences being built on a 36-hole golf course, a state-of-the-art 7-tower 5,000 bed Hamptons Hospital, a technology park, airport, convention center and a 144MW waste-to-energy power plant - all built to top international standards.

The MCX solar power plant will generate a minimum of 30 megawatts with a capacity to expand to 50 megawatts to meet tertiary power demands at MMTC in the future, thus creating hundreds of jobs for technical specialists and support staff. With the MCX plant, power will be generated right in the City where it will be used, increasing efficiency and cost savings by eliminating the need for long-distance power transmission.

The plant will break ground in November 2019 and complete by December 2020. It will be the largest solar power plant in East Africa.

In the last five years, Kenya has tripled access to electricity, with 75% of Kenyans now connected and universal access achievable by 2022. According to the Kenyan Ministry of Energy, 90% of its power comes from renewable sources, a figure that will reach 100% by 2020. The Ministry has expressed particular interest in solar solutions to round out its power portfolio, which is currently dominated by hydroelectric and geothermal sources.

With the phasing out of fossil fuels and growing energy demands, the Kenyan government has set the stage for the rapid expansion of Kenya's renewable energy sector. MCX's plant at MMTC is uniquely situated to meet such demands in the populous region of Western Kenya while simultaneously preserving the clean air and environment for which the region is known.

MCX's expansion into Africa is aligned with American interests abroad, as outlined in the objectives of the US government's newly created and $60-billion-funded International Development Finance Corporation (IDFC), which seeks to enable the US private sector to compete globally with other players from China and the rest of the world in infrastructure development projects all over the developing world.

MCX's presence at MMTC furthermore aligns with the specific goals of the USAID Power Africa initiative, launched by the Obama administration and continued under the Trump administration, with the objective of expanding access to clean energy to the millions in sub-Saharan Africa who lack it.

In its partnership with MMTC, MCX will strengthen American relations in Kenya and provide Kenyans with green energy solutions, thus setting the gold standard for how to power African cities of the future.