Meals on Wheels San Francisco is holding a virtual dedication on November 19 to celebrate the opening of its new kitchen and food distribution center and to commemorate the organization's 50th anniversary. 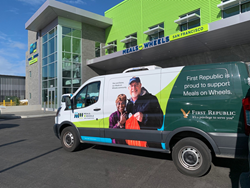 "Our new kitchen is more than a building just like we as an organization are more than a meal," said Ashley C. McCumber, Chief Executive Officer of Meals on Wheels San Francisco.

Meals on Wheels San Francisco (MOWSF) has opened a new, two-story, industrial Kitchen and Food Distribution Center at 2230 Jerrold Avenue in Bayview that will have the ability to produce up to 30,000 meals daily to be delivered to thousands of homebound older San Franciscans and adults with disabilities. The state-of-the-art kitchen is located in The Sangiacomo Flynn Building, aptly named in honor and in gratitude to the two families who have been the biggest supporters of the $41 million project and Meals on Wheels San Francisco’s mission.

The food distribution center is nearly 36,000 square feet under roof and includes a 25,500 square foot kitchen and space for packaging, shipping and receiving, staff common areas, and offices. At the heart of the industrial kitchen is its commercial-grade equipment that will enable the culinary team to prepare high-volume, culturally diverse meals from scratch to include freshly baked bread and seasonal entrees.

“Never in our 50-year history has the delivery of nutrition and social support to thousands of low-income, predominately seniors of color, been more critical,” says Ashley C. McCumber, Chief Executive Officer of Meals on Wheels San Francisco. “Our new kitchen is more than a building, just like we, as an organization, are more than a meal. This facility represents the future of care for a vulnerable population of San Franciscans in need of nourishment and the peace of mind that we’ll be there to help them live independently and safely in their homes for many decades to come.”

The Sangiacomo Flynn Building is located near the San Francisco Wholesale Produce Market, the Bay Area’s fresh produce source. This proximity will allow MOWSF to work with local vendors to recapture high-quality local produce for meals while reducing food waste. MOWSF will continue to operate its 1375 Fairfax facility for administrative and support services and its Home-Delivered Groceries program.

The age demographics in San Francisco are changing according to the San Francisco Department of Disability and Aging Services, which estimates that the population of older adults living in the city and who will be 60 or older will grow by 30% within the next 10 years.

"For over 50 years, Meals on Wheels San Francisco has continued to show up for San Franciscans,” said San Francisco Mayor London N. Breed. “With COVID, their work is more important than ever to make sure our most vulnerable residents receive nutritious meals and know that their community is looking out for them. This holiday season, we all need to do our part to help our neighbors in need, just as Meals on Wheels has been doing for decades."

MOWSF has a long history in San Francisco of providing meals, wellness checks, and social work services that help thousands of seniors live independently and maintain their general health daily. Within the past decade, the meals delivery program has grown from 523,000 meals delivered in 2007 to 2.2 million meals delivered in 2019.

Approximately 80% of the new kitchen funds were secured through private donations and government support made during the 50th Anniversary Capital Campaign. MOWSF secured New Markets Tax Credits (NMTC) financing, which delivered $8.1 million to the project. The San Francisco Community Investment Fund, Capital Impact Partners, Community Vision CA, and JP Morgan Chase Bank, supported the build via NMTC. The San Francisco Office of Economic and Workforce Development supported the expansion with a $1 million grant. The remaining $3 million of the $41 million project still needs to be raised through the ongoing capital campaign.

About Meals on Wheels San Francisco:
In 2020, Meals on Wheels San Francisco celebrates 50 years of providing older adults residing in the City with what they need to live independent and dignified lives – nutritious meals, professional social work services including daily wellness checks, and a friendly visitor. MOWSF can deliver two meals daily to homebound senior clients, something no other program does in San Francisco. In 2019, staff and volunteers delivered 2.2 million meals to 4,300 seniors and adults with disabilities. Learn how you can get involved at MOWSF.org.