Portland’s best kept political secret is someone residents need to meet before they cast their vote. His name is Ozzie Gonzalez and he is running for Mayor of Portland against incumbent Ted Wheeler. Frustrated by Ozzie being largely ignored by the Portland media, Friends of Gonzalez produced an inspirational, two-minute video to introduce him to voters as ballots drop. 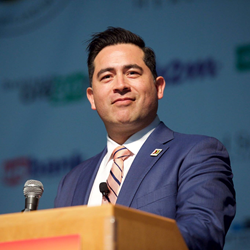 Many of the solutions to our problems already exist. What is missing is the political will, and leadership that can bring our city together around a shared Vision

Portland’s best kept political secret is mayoral candidate Ozzie Gonzalez and he is running for Mayor of Portland against incumbent Ted Wheeler. In his first debate, the published photo of him managed to get cropped in a way that well, cut him out. Since then, he has been waving his political arms in the air trying to get some well-deserved attention from the Portland press – but with little success. So, he decided to take matters into his own hands and introduce himself with an inspirational, two-minute video that makes one thing abundantly clear – he will be taken seriously.

Ozzie Gonzalez’s list of credentials is impressive. He has been serving on the TriMet Board for the last two years. He is an architect and sustainability professional who has mentored 100+ emerging small businesses. He served on the Oregon Association of Minority Entrepreneurs Advisory Board. He served on the City of Portland’s administration building remodel and oversaw the allocation of over $35M in capital improvement.

The Oregonian dismissed him with one sentence, declaring he has “interesting ideas” and then neglected to mention even one of them. But Ozzie Gonzalez has more than “interesting ideas.” Ozzie Gonzalez has bold plans. Like making Portland a Zero Waste city in ten years, overhauling the city’s mobility infrastructure, and ending camping on the street, just to name a few.

Gonzalez is also a husband, a father, and a first-generation Latino. Unconscious bias? Maybe. But Ozzie doesn’t have time for that right now. Ballots have dropped. “I’m running for Mayor of Portland because I believe Portland needs a new kind of leadership,” Ozzie states at the open of his new video. As the video progresses, viewers find out that the “new kind of leadership” refers to that rarest of commodities in modern, American politics – Vision. Ozzie Gonzalez has a vision for the city and the plans to back it up - both of which are conspicuously absent from any of his opponent’s platforms.

Never before has a candidate with this combination of professional credentials and lived experience been on the ballot. As Portland re-emerges from the current crisis, it will need more than the policy points and stalling. Portland will need a leader with enough vision to bring the city together to face the very serious challenges ahead. Ozzie Gonzalez believes he is that leader and would be the first Latino to ever hold the Mayor’s office. So, before Portland votes it might want to check its own unconscious bias and meet the candidate not enough people are talking about.