New Release Will Be Available on April 14 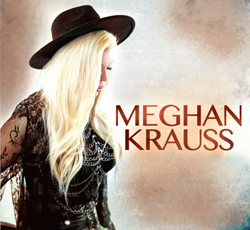 Former singer of "Maragold" Meghan Krauss kicks off her solo career with her highly anticipated debut studio album, self-titled after the classically-trained vocalist.

The solo album unveils a range of fresh new music infused with soul-pop and R&B. Dedicated fans shouldn’t worry though, as there is plenty of rock interspersed throughout the album that showcases Meghan’s powerhouse vocals.

During the creation of her first solo project, Meghan was most excited about the freedom of creating whatever she wanted. Her new music reveals more of herself, both musically and emotionally, than ever before. The first single to be featured on the debut album is “Let Me Introduce Myself Again,” which is the perfect track to set the stage for the remainder of the album and Meghan’s future music career.

Pre-order for the album starts on March 24 on all major platforms, and it will officially be out on April 14. Follow Meghan or visit her website to stay updated on the album and future releases.

Meghan is an American soul-pop, rock and R&B artist, originally from Seattle. Classically trained, she has been praised for her powerful bluesy vocals and energetic stage presence.

Performing as frontwoman for the popular East Coast bands HyJinx and Steal the Sky, she was recruited by guitar virtuoso Greg Howe as the lead singer for the internationally-recognized rock band Maragold. Influenced by music legends such as Whitney Houston, Ann Wilson, and Mariah Carey, Meghan has been singing since she was a young child. Now her new self-titled album produced by Stephen McKnight, and mastered by Grammy award-winning engineer Howie Weinberg, is ready to be shared with the world.