Memor™ 10 Rugged Mobile Computer by Datalogic: DARE TO BE SMART

Datalogic, a global leader in the automatic data capture and process automation markets, is proud to announce the Memor™ 10 rugged mobile computer, one of the few rugged devices validated by the “Android Enterprise Recommended” program from Google. 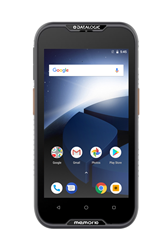 Datalogic, a global leader in the automatic data capture and process automation markets, is proud to announce the Memor™ 10 rugged mobile computer, one of the few rugged devices validated by the “Android Enterprise Recommended” program from Google.

MEMOR™ 10 is part of a new family of rugged Android PDA devices from Datalogic. It offers a slim and compact design while delivering the latest 2D bar code imaging technology for high performance scanning. MEMOR™ 10 combines the durability and the performance of a traditional rugged enterprise device with the styling of a smartphone, and adds the user-friendly experience of Android™ 8.1 (Oreo) with Google Mobile Services (GMS).

Memor 10 device features the Datalogic Wireless Charging System, a ground-breaking new feature for enterprise devices; Datalogic is the first manufacturer to offer this technology in rugged mobile computers and handheld scanners. Based on inductive-charging technology now widespread in numerous consumer electronic products, Datalogic’s Wireless Charging System eliminates battery contacts and pins, that often get dirty, bent, or broken over time – and this removes a key point of failure for devices used in industrial and retail functions. Routine charging system maintenance and cleaning procedures are eliminated which means lower down time, and a lower TCO for Datalogic systems. Datalogic’s Wireless Charging System is also faster than traditional charging solutions. Battery levels can be safely and rapidly “topped-up” between shifts, and fully-recharged in the shortest possible time – all without over-stressing contacts, pins, and cables. For devices used round the clock, or with only short breaks between shifts, this is a great operational advantage.

Memor 10 delivers state of the art Wi-Fi and the latest LTE advanced communications, making it a solid choice for the most popular scanning-enabled applications in Retail, Healthcare, Transportation & Logistics, and Manufacturing. Examples include in Retail: store operations, assisted sales, and manager’s device; in T&L: courier device for proof of delivery, truck device in 3PL; in Manufacturing: production line and quality control; in Healthcare: bedside care, pharmacy and labs.

In addition to the features of the standard model, the Healthcare version of Memor 10 features a disinfectant-ready enclosure to withstand harsh daily cleaning procedures. The back enclosure of the device is manufactured without texture, thereby making the device very easy to clean and the smooth surface does not allow bacteria to lodge on the enclosure. The back hand-strap is also made with healthcare plastic and fully cleanable. The absence of any contacts makes Memor 10 the ideal product for hospital bedside applications.

Memor 10 is one of a handful of rugged devices in the industry included in the launch of the “Android Enterprise Recommended” program, a Google™-led initiative that helps businesses confidently select, deploy, and manage Android™ devices and services in their operations. Google has validated that Memor 10 meets an extensive list of stringent requirements for rugged devices, including regular security updates and version upgrade procedures.

“Google has now set the bar for all device manufacturers if they want to be recommended by the market leader in mobile operating systems”, stated Pietro Todescato, Group Technology Officer of Datalogic. “We believe Enterprise customers shouldn’t compromise on quality or features when choosing a rugged PDA.”

Datalogic Group
Datalogic is a global leader in the automatic data capture and process automation markets, specialized in the designing and production of bar code readers, mobile computers, sensors for detection, measurement and safety, RFID vision and laser marking systems. Datalogic solutions help to increase the efficiency and quality of processes in the Retail, Manufacturing, Transportation & Logistics and Healthcare industries, along the entire value chain.

Today Datalogic Group, headquartered in Bologna (Italy), employs approximately 3,100 staff worldwide, distributed in 30 countries, with manufacturing and repair facilities in the USA, Brazil, Italy, Slovakia, Hungary and Vietnam. In 2017 Datalogic had a turnover of 606 million Euro and invested over 55 million Euros in Research & Development, with an asset of more than 1,200 patents in multiple jurisdictions. Datalogic S.p.A. is listed in the STAR segment of the Italian Stock Exchange since 2001 as DAL.MI. More information about Datalogic at http://www.datalogic.com.