For the first time in 85 years, Mercy College will be celebrating graduates at a Virtual Commencement Ceremony on May 20, 2020 at 11 a.m. While unable to gather in person due to social distancing guidelines, the College is committed to marking this milestone for the more than 3,000 hardworking and deserving graduates. 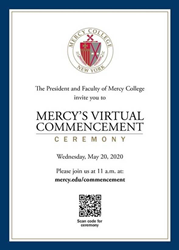 “While we hope to celebrate our graduates at an in-person event in the future when we can safely gather, it is important to mark this milestone and recognize the hard work and perseverance of our Mercy students to make it to graduation,” said Mercy College President Tim Hall.

For the first time in 85 years, Mercy College will be celebrating graduates at a Virtual Commencement Ceremony on May 20, 2020 at 11 a.m. While unable to gather in person due to social distancing guidelines, the College is committed to marking this milestone for the more than 3,000 hardworking and deserving graduates.

The virtual ceremony will include all the pomp and circumstance of an in-person ceremony including remarks from the distinguished Honorary Degree recipients and student speakers, acknowledgment of awards and, of course, the conferring of degrees by Mercy College President Tim Hall. Following the college-wide celebration, students and guests will be invited to join a ceremony specific to their School where they will see their name and photo announced across the screen. To ensure students can participate in the pivotal moment of switching their tassels to mark their status as graduates, Mercy is sending a graduation package to all students which includes a cap and tassel. The College is encouraging students to share their “Tassel Moment” so they can be further commemorated on social media.

“One of my favorite moments of the academic year is when I stand on the stage and shake the hands of those who have earned their degrees, so moving to a virtual ceremony due to the coronavirus was a difficult decision,” said Mercy College President Tim Hall. “While we hope to celebrate our graduates at an in-person event in the future when we can safely gather, it is important to mark this milestone and recognize the hard work and perseverance of our Mercy students to make it to graduation.”

Keeping with tradition, the ceremonies of each of the five schools at Mercy will include remarks from speakers who have demonstrated leadership in the humanitarian, medical, philanthropic and civic fields. Honorary degrees will be bestowed to the speakers for their lifetime achievements and outstanding contributions to society.

Stephanie J. Hull, Ph.D., president and CEO of Girls Inc., will be speaking at the School of Social and Behavioral Sciences ceremony.

As president and CEO of Girls Inc., a national organization that inspires all girls to be strong, smart and bold, Hull drives life-changing programs and experiences to more than 132,000 girls through a network of 80 local organizations across the U.S. and Canada. She also shapes advocacy strategies to strengthen opportunities for girls and improve conditions in which all girls are growing up, particularly those from high-need communities.

Dr. Hull earned her bachelor’s degree in French literature at Wellesley College and her master’s and doctoral degrees at Harvard University in the Department of Romance Languages and Literatures.

Mason Cunningham recently retired from a successful career at Xerox Corporation after 38 years of progressive leadership and management experiences. Prior to her departure she was the vice president of channel marketing for North America Operations. In this role she had responsibility for providing the marketing and communications strategy, and coverage transformation, that enabled channel partners to successfully market and sell Xerox business solutions. She was named senior vice president, sales, services and delivery operations in 2012. She also led the U.S. Go-To-Market strategic initiative as the vice president and business transformation executive. Mason Cunningham served as a board member on the University of Connecticut-Business School advisory board, as well as on the vendor advisory council for Comp TIA. Currently, she is chair of the board of directors for Volunteer New York!, a member of the Westchester County RSVP (Retired Senior Volunteer Program) and is a member of the Friends of Urban Resource Institute. Mason Cunningham is a graduate of the Leadership Westchester (LW) class of 2018; a certified Lean Six Sigma Green Belt and recently received a coaching certification from iPEC as an ELI-MP (Energy Leadership Index-master practitioner).

Cunningham graduated from the State University of New York at Old Westbury with a Bachelor of Science degree in marketing and business management, with a concentration in computer science.

Rajiv Ratan, M.D., Ph.D., executive director at Burke Neurological Institute, and Burke professor of neurology and neuroscience at Weill Cornell Medicine, will be speaking at the School of Health and Natural Sciences ceremony.

Ratan started his career as the chief resident in Neurology at Johns Hopkins and was promoted to assistant professor of neurology and rehab medicine. That same year he started the Ratan Laboratory and was recruited to set up the neuroprotection laboratory in the Department of Neurology and Program in Neuroscience at Harvard Medical School where he later became an associate professor. In 2002, Ratan joined Burke Neurological Institute as director, bringing the Ratan Laboratory with him. He was formally appointed the Winifred Masterson Burke Professor of Neurology and Neuroscience at Weill Medical College in 2004 and named an associate dean for the Medical College in 2011.
Ratan attended the Webb School of California. He received his bachelor’s degree in neuroscience from Amherst College in 1981. He completed an M.D. and Ph.D. at the New York University School of Medicine.

Meisha Ross-Porter, M.S. ’03, Bronx executive superintendent for the New York City Department of Education will be speaking at the School of Education and School of Liberal Arts ceremonies.

As executive superintendent for the Bronx, Ross-Porter is deeply invested in strengthening school leaders’ equity lens and building collaborative practices across schools. She formerly served as superintendent for Community School District #11 and principal of The Bronx School for Law, Government and Justice (LGJ). Having worked her way up the ranks at LGJ, she is exceedingly aware of the challenges city schools face and has dedicated her life to improving the learning environment for all students.

Ross-Porter is a proud graduate of Mercy College’s graduate Administration and Supervision program. She received her Bachelor of Arts in English concentrating in cross cultural literature and Black and Puerto Rican Studies at Hunter College and is currently pursuing her Ed.D. at Fordham University
###

About Mercy College
Mercy College is the dynamic, diverse New York City area college whose students are on a personal mission: to get the most out of life by getting the most out of their education. Founded in 1950, Mercy is a coeducational and nonsectarian college that offers more than 90 undergraduate and graduate degree and certificate programs within five schools: Business, Education, Health and Natural Sciences, Liberal Arts and Social and Behavioral Sciences. With campuses in Dobbs Ferry, Bronx, Manhattan and Yorktown Heights, the vibrancy of the College culture is sustained by a diverse student body from around the region.