Mercy College will honor five exemplary alumni for their accomplishments at the annual Alumni Achievement Awards Event on Thursday, February 4 at 6 p.m. The event will be held virtually this year. 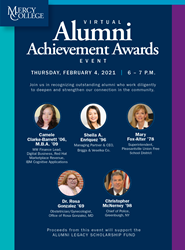 Mercy College will honor five exemplary alumni for their accomplishments at the annual Alumni Achievement Awards Event on Thursday, February 4 at 6 p.m. The event will be held virtually this year.

The event celebrates these alumni’s contributions to the community and their dedication to strengthening Mercy’s programs and will raise support for the Alumni Legacy Scholarship Fund. This scholarship fund— which was created by the Mercy College Alumni Advisory Council to support the children, stepchildren and/or legal dependents of Mercy College alumni — is the only fund specifically designated to provide educational support to second-generation Mercy students.

Camele Clarke-Barrett ’06, MBA ’09 — who earned both her bachelor’s degree in finance and her MBA from Mercy College — is the global financial lead for IBM’s digital business portfolio. She is currently a candidate for professional certification as a Certified Management Accountant from the Institute of Management Accountants (IMA). Passionate about helping to empower and channel access to underserved populations, Clarke-Barrett serves on the advisory board of the Lois Bronz Children’s Center in White Plains, New York. She also volunteers as a Girl Scouts troop leader and as the children’s ministry coordinator for her local church.

Sheila A. Enriquez ’96 — who earned her bachelor’s degree in accounting from Mercy College — is managing partner and CEO of Briggs & Veselka Co., the fourth largest independent certified public accountant (CPA) firm in the Southwest and the largest independent firm in Houston. As a CPA and an attorney with over 23 years of experience, she offers a powerful blend of financial expertise and legal perspective to her clients. In her first year as CEO, she helped achieve a 29% growth rate and led the integration of six acquisitions, expanding the firm’s Texas presence. Enriquez recently completed a term as an at-large member on the governing council of the American Institute of Certified Public Accountants (AICPA) and will rejoin the council as a Texas representative in May 2021. She is also a member of the State Bar of Texas and the Texas Society of CPAs (TXCPA), where she is the current chairman-elect nominee and a past president of the Houston chapter. The Houston Business Journal named her 2020 Most Admired CEO Honoree, and the Greater Houston Women’s Chamber of Commerce named her 2020 Breakthrough Woman. Her husband Jose ‘96 is also a Mercy alumnus.

Mary Fox-Alter ’78 — who earned her bachelor’s degree in history and secondary education from Mercy College and her professional diploma in school administration from the College of New Rochelle — is the superintendent of Pleasantville Union Free School District in Pleasantville, New York. She has worked in the district for 31 years in a variety of roles including teacher, staff developer, chief information officer, director of instructional services and now superintendent. In addition, she is a regional and state-level leader who recently completed a second term on the executive committee of the New York State Council of School Superintendents. She also serves on the Mercy College Dean’s Advisory Board. Fox-Alter has been recognized with several awards, including the Lower Hudson Council of School Superintendents Distinguished Service Award and the Westchester County Distinguished Female Leader Award.

Dr. Rosa Gonzalez ’69 — who earned her bachelor’s degree in biology from Mercy College — is an obstetrician and gynecologist in private practice in North Bergen, New Jersey. Her family fled Cuba when she was a teenager, so she faced the many language barriers of American medical school entrance exams after graduating from Mercy College. After a brief stretch in a pathology job at Mount Sinai Hospital, she moved to Spain where she studied at the University of Zaragoza. She returned to the U.S. to begin her first internship at Montefiore Hospital, later completing her residency at Bronx Municipal Hospital. In 1979, she became a clinical instructor at Albert Einstein College, leaving only to pursue her mission of serving the community as a physician. She maintains a long-standing membership in the American Society for Colposcopy and Cervical Pathology.

Christopher McNerney ’98 is the chief of police for the Town of Greenburgh Police Department in Greenburgh, New York. Over the past 25 years, he has worked in every division of the department, including patrol, the street crime unit, detective division, staff services division and special investigations (internal affairs). In 2013, he was sworn in as the chief of police and began instituting many new initiatives, most notably the first full patrol implementation of police body-worn cameras in Westchester County. After retiring in 2019 to work as the chief criminal investigator in the Westchester County District Attorney’s Office, McNerney returned to the Town of Greenburgh Police Department as chief of police in 2020. A licensed attorney in New York and Connecticut, he has also worked as an adjunct professor of criminology at Mercy College. He currently serves as president of the Westchester County Chiefs of Police Association and is active in the New York State Chiefs Association, the International Association of Chiefs of Police and the Westchester County Task Force for Police Reform.

Mercy College is fortunate to honor such an outstanding group of alumni. Supporters can register to attend the free virtual Alumni Achievement Award Event and support the Alumni Legacy Support Fund here: https://alumni.mercy.edu/aa/2021.

About Mercy College
Mercy College is the dynamic, diverse New York City area college whose students are on a personal mission: to get the most out of life by getting the most out of their education. Founded in 1950, Mercy is a coeducational and nonsectarian college that offers more than 90 undergraduate and graduate degree and certificate programs within five schools: Business, Education, Health and Natural Sciences, Liberal Arts and Social and Behavioral Sciences. With campuses in Dobbs Ferry, Bronx, Manhattan and Yorktown Heights, the vibrancy of the College culture is sustained by a diverse student body from around the region.