Charros, a pillar of Mexican culture, will honor their equestrian traditions this September in the state of Jalisco. More than a form of rodeo, charrería is a way of life and is designated an UNESCO-designated Intangible Cultural Heritage of Humanity. There are numerous activities travelers can participate in to experience a taste of one of Mexico’s oldest cultural traditions. 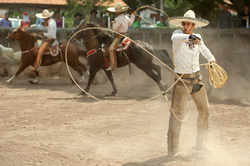 One of the many talented charros in Jalisco

Charrería, Mexico’s national sport and an UNESCO-designated Intangible Cultural Heritage of Humanity, will take center stage in the state of Jalisco this September when Charros de Jalisco, Mexico’s first-ever competitive charro group, celebrates its 100th anniversary. More than a form of rodeo, charrería is a way of life in Jalisco, originating from Mexico’s herdsmen culture of the 1500s and passed down through generations. Travelers interested in experiencing a taste of one of Mexico’s oldest cultural traditions can participate in the following activities:

GRAND PARADE
On September 14, visitors can view one of the celebration’s most-anticipated events, the Sanctuary of the Virgin parade which will recount the history of charrería, ending in Guadalajara’s Lienzo Charro Jalisco. The parade gives visitors a prime opportunity to see the traditional attire of charros and escaramuzas up close. Custom made outfits consist of perfectly tailored leather pants, matching vest and short jacket, silk bow tie, and sombrero for the charros and colorful dresses or blouses with full skirts and sombreros for the escaramuzas. A full schedule and parade route will be confirmed in the coming months.

EQUESTRIAN SHOW
Other scheduled activities in Guadalajara include an equestrian show titled “Charrería Pasión y Revolución” that will take place at Lienzo Charro Jalisco on September 11 and September 18. Tickets will be available for purchase one month in advance of the event.

LANDMARK CHARRO VISIT
For the first time in history, the Charros de Salamanca from Salamanca, Spain, the forefathers of the Charros de Jalisco, will visit Guadalajara on September 16, the day of Mexican Independence. While in Guadalajara, the Salamanca charros will host programming to share their culture with locals and travelers in Guadalajara. More information on their schedule will be available in the coming months.

CHARRERIA YEAR ROUND
Visitors who can’t make the anniversary celebrations can still experience charrería through a variety of other activities offered in Jalisco year-round. The Charros de Jalisco team practices every Sunday at noon at the Lienzo Charros de Jalisco arena. Spectators are welcome for an entry fee of 50 pesos (US$3). The arena is currently undergoing renovations and is slated to re-open prior to February 14 for a nationwide tournament. Other annual events include the children’s charro championship, which will take place April 30 – May 2, and the women’s championship, “Feria de escaramuzas,” to take place May 8 – 10.

Visitors can also book guided group or private tours of Lienzo Charros de Jalisco in English. Andares de México offers “Charrería Tour, World Heritage of Humanity” organized by a member of the Charros de Jalisco team, and Panoramex offers guided tours that give participants the chance to tour the stables, view the charrería, and ride one of the horses boarded at the arena.

In Puerto Vallarta, Canopy River offers “Fiesta in the Mountains,” which brings visitors through rural areas outside of the city to learn about the traditions and customs of Jalisco at fairgrounds featuring games, local food, live mariachi, and charrería.

In the town of Tequila, Mundo Cuervo’s Centro Cultural Juan Beckmann Gallardo houses “The Essence of the Land,” an exhibition exploring charrería’s history in Jalisco.

About Jalisco
Located in western Mexico, the state of Jalisco is the birthplace of many of Latin America’s greatest cultural treasures including tequila, mariachi, and the national sport of charrería (Mexican rodeo). Jalisco’s diverse topography ranges from scenic mountains to arid agave fields, cosmopolitan urban centers, and world class beaches stretching more than 200 miles along the Pacific coast. Guadalajara, Jalisco’s capital and the second largest city in Mexico, exquisitely balances modernity and tradition with world-class cuisine, contemporary arts, and a rich cultural heritage. Puerto Vallarta, one of Mexico’s most popular tourist destinations, offers fun in the sun on a stunning shoreline; and the up-and-coming Costalegre region is known for its picturesque beaches, capes, and bays and upscale bohemian chic vibe.