Mia, Member of Girl Pow-R, Recently Recorded a Cover of "When We Were Young"

A member of the rising pop supergoup Girl Pow-R, Mia recently recorded a cover of Adele's "When We Were Young". 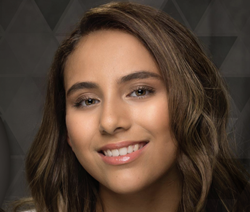 "The ballad is full of emotion and piercing melody, which is indicative of Mia's style."

Mia, one of the newest members of the pop group Girl Pow-R, recently recorded a cover of Adele's "When We Were Young".

The ballad is full of emotion and piercing melody, which is indicative of Mia's style. Pop and soul music resonates with her as an artist, and over the past few years her interests have grown exponentially, often being inspired by artists such as Ariana Grande and Adele.

Mia discovered her love for music at a very young age, and since then has been honing her skills by taking vocal and piano lessons, participating in talent shows and singing competitions, and recording covers of her favourite songs on YouTube.

Recently, Mia was able to perform at the Israel Cancer Research Foundation Show at Koerner Hall alongside talented singers such as Tony Vincent, Yvan Pedneault and Justin Guarini, with whom she performed a duet.

Girl Pow-R, which was formed on International Women's Day in 2017, has had a busy time since its inception. The group has performed over 200 shows, and has been nominated for awards like the Niagara Music Awards' "Best New Group" and a Toronto Independent Music Award.

Girl Pow-R's debut album was launched in the summer of 2019 at Youth Day in Yonge-Dundas Square in Toronto. As part of the opportunity to share their messages and the album, 'This Is Us', Girl Pow-R was interviewed on Breakfast Television, CityTV, CP24 Breakfast and Sirius XM Radio.