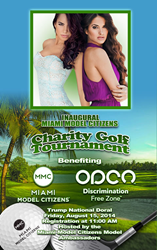 Miami Model Citizens, the group of models who are more than just a bunch of pretty faces, is pleased to announce its inaugural model caddy charity golf tournament on Friday, August 15, 2014 at Trump Doral Resort & Spa in Miami beginning at 11:00 A.M. Proceeds from the charity golf tournament benefit Miami Model Citizens Foundation and will go to support the Foundation’s work with the Discrimination Free Zone, Paws 4 You Rescue, Peaceful Ridge Rescue, and 305 Youth Sports. Admission is $1,000.00 per golf foursome, and includes a catered lunch and dinner, a great goodie bag, and a day of playing golf with the Miami Model Citizens model ambassadors. Registration and sponsorship information is online at http://www.miamimodelcitizens.com.

ABOUT THE MIAMI MODEL CITIZENS:

The Miami Model Citizens are a trailblazing group of women from the fashion scene making an impact upon Miami through charity fundraisers and volunteering.

Miami Model CitizensMore than just a bunch of pretty faces.