Michael Atchison-Sprankle’s book “The Second Project: Siberia- Steal the Money Back” is a crime drama inspired by actual projects undertaken in the course of his career

Recent release “The Second Project: Siberia- Steal the Money Back” from Page Publishing author Michael Atchison-Sprankle is an action-packed adventure following the exploits of Jim Standish, an international problem-solver whose projects frequently put him in the line of fire as he pursues some of the most hardened criminals on the planet- and bends the rules quite often himself. 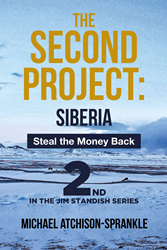 Michael Atchison-Sprankle is a Texas native and retired international crisis manager currently residing with his wife in a suburb of Houston. He has published his new book “The Second Project: Siberia- Steal the Money Back”.

Jim Standish is a genuine tough guy. He feels the lack of fear and an inability to resist beautiful women are two of his weaknesses and is very good at solving ‘unsolvable’ projects for his clients. In this book, he tackles one major project and two smaller ones that involve the Mafia in Mexico City and a drug lord in western Mexico. He gets seduced by four women and has several people try to kill him. He also winds up with custody of twins that their mother doesn’t want.

A foreign group stole $740,000 from a Houston client, and Jim thinks he can steal it back. Four countries and two American cities later, he gets the chance, and almost gets killed more than once in the process. The love of his life, a beautiful attorney, comes close to being raped and murdered—twice—in California. . . but she’s as tough as Jim, and a black belt in karate. So, one of the criminals winds up in prison and the other gets castrated by his mob partners. The problem is that she isn’t sure she loves Jim enough to marry him.

This fast-paced novel is one of a series that follow three principal characters as they try to live their uncommon lives. Jim’s projects—the major ones and many of the smaller ones—are fictionalized versions of actual projects the author was involved with during his years as an international crisis manager.

Readers who wish to experience this engaging work can purchase “The Second Project: Siberia- Steal the Money Back” at bookstores everywhere, or online at the Apple iTunes store, Amazon, Google Play, or Barnes and Noble.