“Connor Race: The Tontine Plot” from Christian Faith Publishing author Michael Curran is a stirring tale that allows the readers to witness the fast-paced violent trail and lethal deception in the southern mountain townscape of New Mexico. 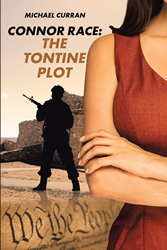 “Connor Race: The Tontine Plot”: a gripping narrative that shows the bravery of a covert operative who faced fearlessly the shadowy terrain of uncertainties. “Connor Race: The Tontine Plot” is the creation of published author Michael Curran, a former newspaper editor, journalist, columnist, Opinion Editorial, and feature writer for New Mexico publications. He draws many of his truth-based story-telling ideas from his experiences and acquaintances in countries beyond the borders of the US.

Curran writes, “Connor Race: The Tontine Plot follows the perilous exploits of American Security Agency (ASA) covert operative, Connor Race, and a cast of characters as they encounter deadly adversaries bent on the destruction of Shade Cassedy, the alluring, spoiled, twenty-four-year-old who has no clue of her planned demise. As Race moves across the shadowy landscapes of intrigue, betrayal, potential romance, and clandestine operations, he knows one thing for certain, a self-evident truth that requires no proof—the more you win, the closer you come to losing.

“Are Middle East extremists responsible for the murderous attempts on the young lady’s life because of her father’s agency duties or is there a brutal home-grown scheme of greed to exterminate her? Ordinarily, this type of assignment is not part of the ASA’s raison d'être, but there are mitigating circumstances as to why she has come under the guardianship of the agency. What initially is assumed to be a ‘babysitting’ assignment is anything but.

“Experience the initial fast-paced violent pursuit on Bolivia’s high-altitude Death Road, and the eventual deadly conspiracy in the southern mountain vistas of New Mexico to murder Ms. Cassedy, who unwittingly possesses a long-buried family secret dating back to the Revolutionary War. The cryptic word, Tontine, is introduced to the narrative and has been obscurely identified with her family. Is she a direct descendant to one of the Founders or is she related to a financial strategy from the same period?

“The mysterious director of the ASA, Mr. Marco, periodically hints he knows why she must live and have children. Is there some definite esoteric destiny she is meant to fulfill?

“The exciting finale occurs at the Gran Quivira 1650 Spanish ruins in isolated southern New Mexico. This work is not formulaic and is not meant to follow familiar pattern dynamics.”

Published by Christian Faith Publishing, Curran’s new book is a plot-driven account that entices the readers to continue reading until its last page as it shares extraordinary scenes they will never forget about the covert operative.

With this book, the author brings a thrilling reading experience to the readers as this tome shows how the covert operative moves across the shadowy terrain of intrigue, betrayal, potential romance, and undercover operations.

View a synopsis of “Connor Race: The Tontine Plot” on YouTube.

For additional information or inquiries about “Connor Race: The Tontine Plot,” contact the Christian Faith Publishing media department at 866-554-0919.