Recent release “Judge Rath” from Page Publishing author Michael Davidson is a gripping mystery that follows our familiar character into the past where he fights to solve “The Case of the Cannabis Cannibals” and learns about himself along the way. 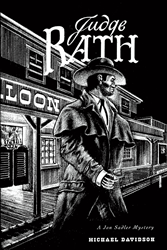 Michael writes, “Judge Rath is the fourth book in the Jon Sadler Mystery series. I thought after I’d written Darth and the Puppeteers, I was finished with Mr. Sadler. But I missed him and eventually came up with an idea of how I could get him in trouble again. If you’ve read my three previous novels with Jon Sadler as protagonist, you will know that I lean slightly toward the psychic and metaphysical.

In Judge Rath I have created a mystery in which, Jon, as Judge Rath, and some of my favorite characters in the first three novels, find themselves in their past lives caught up in a wild-west whodunit set in the year 1864. The scene is the City of San Fernando, California, in the San Fernando Valley.

Jon has been sent into the past by, Aaron, an Avatar affiliated with our old friend, Darth. For reasons explained in the book, Jon was in need of discovering an element in his nature that had been passive in his life as a psychiatrist. Judge Rath has a proclivity to shoot first, and shoot again, and finds himself mired in what appears to be the random killings of saloon whores.

Out of frustration, Jon telegraphs the Pinkerton Detective Agency in Chicago. Alan Pinkerton sends out his ace female detective, Kate Wayne, the first female detective in the country. Together, and with the support of President Abraham Lincoln, they undertake to solve what history will refer to as: The Case of the Cannabis Cannibals.”

Published by Page Publishing, Michael Davidson’s novel will surprise your expectations and take you on a ride through time and space.

Join Jon Sadler and his associates as they navigate otherworldly experiences in the Old West.

Readers who wish to experience this unearthly work can purchase“Judge Rath” at bookstores everywhere, or online at the Apple iTunes Store, Amazon, Google Play, or Barnes and Noble.