Recent release “Darth and the Puppeteers” from Page Publishing author Michael Davidson is a galvanizing novel of an inhuman creature’s life in a mundane world. 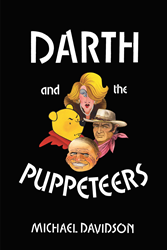 Michael Davidson, a published author and writer from San Diego, California, has completed his new book “Darth and the Puppeteers”: a gripping read of a nigh-human being and his heart-stopping journey to halt an impending evil from destroying everything in its path.

Author Davidson shows the capacity for humans to turn to drastic measures. Every Friday evening in an office six doors off Colorado Boulevard, Pasadena California, Jon Sadler and three fellow psychotherapists practice a therapeutic intervention with hand puppetry in an attempt to assist their clients in drawing out the dark side of their personalities, what Carl Jung coined as the Shadow.

The depth of their combined knowledge assures them of the benign nature of their undertaking so that they were unprepared for the results of their efforts and unaware that the neighborhood killings were intimately related to their little friends.

Not far, as the crow flies on the north side of Riverside Drive, lay the Glendale site of Forrest Lawn Cemeteries, a two hundred acres of cultivated earth reserved for the dead. At the summit of the enriched soil, Jon Sadler’s friend and associate, Darth, lay quietly at rest in his vaultlike crypt, at least that was where he was supposed to be.

Darth was never really human. He had appeared and befriended Jon Sadler in a combined effort to eradicate the demon, Samael, the angel of death who had taken up residency in the Ocean Front Mall in Long Beach. The culmination of that effort resulted in Darth’s demise, and Darth’s body, which was not really his body, was interred. Now Darth is needed in Pasadena, and that’s where the story begins.

Published by New York City-based Page Publishing, Michael Davidson’s enthralling account is the third saga of the John Sadler Mysteries and builds up the excitement of the first two books to its ultimate climax.

Readers who wish to experience this work can purchase “Darth and the Puppeteers” at bookstores everywhere, or online at the Apple iTunes store, Amazon, Google Play, or Barnes and Noble.