New book tells the true story of author Michael Darter’s search for Eugene Darter, the mind boggling discoveries and miracles that occurred until its closure was achieved. 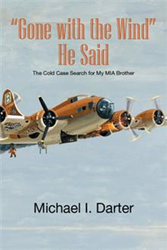 S/Sgt. Eugene F. Darter became missing on his first US Army Air Corps bombing mission over Germany on December 16, 1943. He was not reported to be in any Prisoner of War (POW) camps, did not return home after the war ended, and was assumed to be killed in action by the government. Their parents, however, refused to accept that Eugene had died and strongly believed he would someday return home. There was always this continuing feeling of uncertainty in the Darter’s home, and there was never any end to the grieving and wondering what happened and why Eugene had not returned home.

“Gone with the Wind,” He Said” by author Michael I. Darter tells the story of the cold case investigation to find Eugene, his airman brother who vanished in the skies over Nazi Europe on his first bombing mission over Germany. But along the path of Michael’s discovery were some amazing miracles, including discovering Eugene’s surviving crew and their families, what happened to his two other Missing in Action (MIA) crewmates(including the wife of the pilot who finally knows what happened to her loving husband),, pieces of his B-17 bomber on the beach a few days before a long planned memorial, and eyewitnesses who saw the bomber crash and crew members captured by the Nazis on a Dutch island.

However, the greatest discovery was an eyewitness who saw an American airman come down through the fog and splash down into the sea, crying for help, but then carried away by the fierce wind farther out into the freezing sea beyond reach. “Gone with the wind” was his description of the shocking event unfolding in the stormy sea just in front of him.

Well researched and documented over many years, “Gone with the Wind,” He Said” will be of particular interest to many families who have MIAs in America’s wars. It also describes how much information there is already available today on the Internet, in databases, X-files of unknowns, individual researchers in the US and abroad, and in the National Archives for searching for one’s beloved MIA aside from a great deal of assistance from the US government, who has many teams in the field every day searching, finding, identifying, and bringing home those hero MIAs.

Michael I. Darter is an emeritus professor of civil and environmental engineering at the University of Illinois at Urbana-Champaign. Darter is an international expert in transportation infrastructure, but nothing he has accomplished in his profession has been as satisfying as discovering what happened to his only brother. He has mourned his loss for decades and many years ago pledged to find out what happened to him no matter what it took to bring closure to his family. The discoveries indeed brought heartwarming closure also to his brother’s surviving crewmates and the former wife of the pilot who finally knows what happened to her beloved husband.