Capstone Strategic’s survey of middle market executives shows 53% likely to pursue mergers and acquisitions in 2016 compared to 41% when last surveyed. 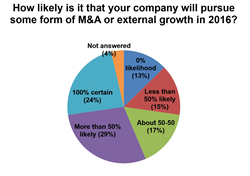 Of the middle market executives surveyed, 53% are likely to pursue M&A in 2016.

This survey confirms what we ourselves observed, that 2015 was an active year for middle market M&A and 2016 is likely to prove an even stronger year.

M&A advisory firm Capstone Strategic surveyed middle market executives from multiple industries on their growth and M&A experience in 2015 and their outlook for 2016. The survey was conducted in December 2015, and followed a previous survey in 2014.

The environment for growth in 2015 was seen by most in a positive light, with the majority reporting the same (46%) or an improved (36%) environment.

Looking forward to the coming year, companies showed a stronger inclination to engage in M&A, compared to predictions when we last asked this question in 2014 (53% certain or likely, compared to 41%).

As for barriers to engaging in M&A, these were largely internal, with respondents citing “lack of resources” (33%) as a primary reason not to pursue transactions.

Capstone’s CEO David Braun said: “This survey confirms what we ourselves observed, that 2015 was an active year for middle market M&A and 2016 is likely to prove an even stronger year. We see a growing polarization between growth-focused companies and those that are sitting on the sidelines. While many companies are still holding cash, more players are emboldened to expand through external growth. This includes acquisitions but also minority ownership deals, joint ventures and strategic alliances. When growth stagnates, M&A can often provide the fastest path forward. When growth is high, companies should seize the opportunity to plan for further expansion.”

The full survey, State of Middle Market M&A 2015, can be viewed by clicking here.

Capstone is a consulting firm located outside of Washington DC specializing in corporate growth strategies, primarily Mergers & Acquisitions. Founded in 1995 by CEO David Braun, Capstone has facilitated over $1 billion of successful transactions in a wide variety of manufacturing and service industries. Capstone utilizes a proprietary process to provide tailored services to clients in a broad range of domestic and international markets. For more information about Capstone and its growth strategy and advisory capabilities, please visit http://www.CapstoneStrategic.com. For timely commentary and insights into the M&A market, please visit the Successful Acquisitions blog at http://www.SuccessfulAcquisitions.net. Capstone can also be reached at 703.854.1910 or Growth(at)CapstoneStrategic.com