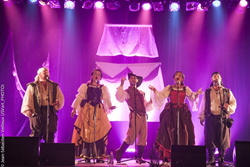 To us, sea shanties have always been popular ...

Maritime vocal group Bounding Main is celebrating the popularity of sea shanties on social media platforms AND their 18th anniversary of performing together.

While many folks are just discovering the power and joy of singing historic work songs together, Bounding Main has been performing this music across North America and Europe for almost two decades! But as Stephen Colbert declared, “2021 is the Year of the Sea Shanty!”

“To us, sea shanties have always been popular,” group founder, Dean Calin, said. “I learned maritime tunes when I was a kid – we sang Sloop John B and Blow the Man Down in music class. I enjoyed the music so much that in 2003, I formed a five person acapella group to perform this music professionally and we’ve been singing sea shanties and maritime ballads ever since!”

The group has performed at festivals dedicated to maritime music in the United States, Canada, Germany, England, the Netherlands, France and Poland and distributes their music globally. “It is wonderful to be able to share maritime music with audiences across the globe,” said Bounding Main member Christie Dalby. “It’s also gratifying to see fellow performers, like The Longest Johns, being recognized. We performed with them last February, just prior to the pandemic, and none of us would have anticipated the explosion of sea shanty music on social media,” said Bounding Main member Gina Dalby.

“All of the groups have a different spin on how they perform the songs,” said Bounding Main music director Jonathan Krivitzky. “I do many of the arrangements of our music and we tend to take a richly harmonic approach. Other groups perform them exactly like the 18th century sailors would have, very traditional, with other groups falling somewhere in-between.”

Another member of this acapella group, David Yondorf, said, “We have embraced social media to keep in touch with fans. We have even released several videos demonstrating how we’ve coped with the isolation of the pandemic – including performing from inside T-Rex costumes!” (https://youtu.be/Ft4vU6yT80Q)

The group looks forward to celebrating their 18th anniversary on Tuesday, 19 January 2021, and to resuming live performances later this year.