Mike Rink’s new book “Alaska Secession: Enough Is Enough” is a tale pitting a group of advocates against a clandestine government operation against the will of Alaskans

Recent release “Alaska Secession: Enough Is Enough” from Page Publishing author Mike Rink is a spellbinding thriller pitting a group advocating for the secession of the forty-ninth state against a clandestine government operation aimed at stopping their efforts at any cost. Retired Air Force pilot Cooper Nelson becomes the de facto leader of the secessionists after the founders are killed by black ops assassins; can Cooper hold the movement together to fulfill the will of Alaskans? 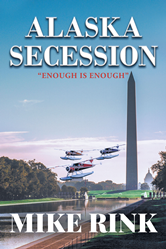 Mike Rink has completed his new book “Alaska Secession: Enough Is Enough”: a gripping and potent debut novel that keeps the pages turning until its stunning conclusion.

Two men who have been working closely together for several months are killed unexpectedly two days apart. One by an assassin’s bullet to the forehead as he was driving to work and the other by a hellfire missile launched from a predator UAV as he was taking off from a lake in his floatplane.

Cooper Nelson, retired air force fighter pilot and newly hired bush plane pilot for Kate Westbrooke, Alaska’s new reporter from the National Business Review, was at the lake with Kate when the incident happened. He immediately recognized the attack was intentional.

Cooper and Kate quickly discover the meeting was being held in secret, or nearly so, and that the more than sixty people present at the lake were involved in the beginning stages of a statewide effort to convince their fellow Alaskans to join them in a movement to secede from the United States. In fact, they were the guests of honor as well as the next targets of the killers working to derail the secession movement before it can really get started.

Without notice Cooper becomes the new “temporary” leader of the secession movement that will lead him all the way to Washington DC and a tense face-to-face meeting with a hostile US government. Standing alone, with his life in the balance, the entire world watches it unfold live when Cooper explains why secession is the right answer for Alaska.

Readers who wish to experience this engaging work can purchase “Alaska Secession: Enough Is Enough” at bookstores everywhere, or online at the Apple iTunes Store, Amazon, Google Play, or Barnes and Noble.