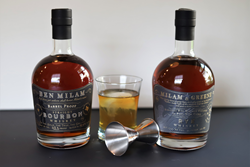 he San Francisco World Spirits Competition is considered to be the most influential spirits competition in the world and is a clear endorsement for whiskey drinkers to know that our bourbon and rye are among the best on the shelves today.

The 20th annual San Francisco World Spirits Competition is the world’s largest competition of its kind, with almost 3,000 entries and judges from all over the world. The 51 judges of the 2020 Competition are well known spirits-industry experts who evaluate entries in blind tasting formats. The Double Gold designation is awarded when every judge on the panel declares the entry as a Gold Medal winner. Only a very select few of the finest products in the world ever earn this recognition.

“The San Francisco World Spirits Competition is considered to be the most influential spirits competition in the world and is a clear endorsement for whiskey drinkers to know that our bourbon and rye are among the best on the shelves today,” says Heather Greene, CEO and master blender of Provision Spirits, makers of Milam & Greene Whiskey and Ben Milam Whiskey. “We believe that our combined 58-years of whiskey-making among us and innovative approach in the independent whiskey space creates some of the finest American Whiskeys available.”

The Milam & Greene Whiskey team distills both in their hometown of Blanco, Texas and in master distiller Marlene Holmes’s home state of Kentucky. Milam & Greene Whiskey casks, grains and people come from all over America. In addition to distilling on-site and off site, the team blends, batches, sources, finishes, and hand-bottles. In 2020, the team will be sending casks to various parts of the US to study the effects of U.S. geography on whiskey. The team plans to sell its award-winning bottles across the nation in the coming months.

“We think of Milam and Greene as a truly American Whiskey experience strengthened by our renegade Texas heart,” says master distiller, Marlene Holmes.

The Blanco, Texas based Milam & Greene Whiskey distillery has currently turned its attention to the community during the COVID-19 pandemic by producing hand sanitizer for the healthcare community and first responders. In addition, it is supporting local charities and providing assistance to service industry employees directly impacted by the closure of bars and restaurants.

Pricing and Availability
Milam & Greene Whiskey is soon to be distributed nationally and is currently distributed statewide in Texas at the finest liquor stores and at the distillery itself. Milam & Greene Straight Rye Whiskey Finished in Port Wine Casks retails for a suggested retail price of $47.99, while the Ben Milam Barrel Proof Straight Bourbon is available for a suggested retail price of $79.99. Find the nearest retailer with https://milamandgreenewhiskey.com/find-our-whiskies/.