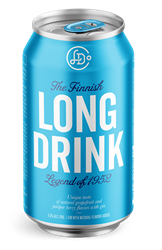 The Long Drink, a top-selling, legendary category of alcoholic beverages in Finland, whose origins go back to 1952, is pleased to announce that award-winning actor, Miles Teller, has joined the company as a co-owner.

The category of ‘long drinks’ was brought to America for the first time in early 2018 by the next generation of Finns, co-founders Ere Partanen, Sakari Manninen and Mikael Taipale, alongside American entrepreneur, Evan Burns, who wanted the world to experience the refreshing and unique Finnish Long Drink.

Miles was introduced to Long Drink in the Spring of 2018 when he was in New York City for the weekend. Miles stepped out to purchase a few things at a Lower East Side liquor store and found himself at a tasting of Long Drink. Miles gave it a try, loved it, and learned it’s the number one type of alcohol in Finland and a category that was first brought to the US in early 2018. The Finns he met, at one of the very first tastings in the United States, turned out to be Ere Partanen and Sakari Manninen, two of the founders of Long Drink.

“I’m thrilled and honored to join forces with Ere, Sakari, Mikael, and Evan on this adventure and am excited for my upcoming trip to Finland to learn more about the origin of Long Drink. Looking forward to bringing my love of Long Drink across the states,” says Miles Teller, co-owner of The Long Drink.

After telling more friends about it, Miles realized he had a mutual friend with Evan Burns, one of the founders. Miles had his friend connect him with Evan, and soon after, the two were together discussing the awesome movement of superfans growing behind Long Drink. A friendship developed, and Miles kept sharing ideas on how to grow the brand and bring the story of the historic drink to life.

“We kept meeting up with Miles and brainstorming about how well the company was doing, what our plans were for the future and realized he was such a great fit for the team,” says Evan Burns, co-founder and chairman of The Long Drink. “Eventually, a plan was scratched out of having Miles become an owner and help lead in creative strategy, telling the story of long drink, and building key partnerships. We couldn’t be more excited about the future,” says Burns.

The roots of ‘long drinks’ go back to the 1952 Summer Games in Helsinki, a time when a country of four million people was still poor and recovering from World War II. Full of pride, the Finns wanted to give athletes and tourists an unforgettable experience. However, the officials had a concern: how will we serve drinks quickly enough to all the visitors!? As a solution, they came up with a revolutionary idea of a new liquor drink, and so the first ‘long drinks’ were born.

The Long Drink combines the origins of the past with the modern day processing and technology of the future. The result is an award-winning, refreshing, citrus soda with a premium liquor kick. Canned at 5.5% Alc./Vol., Long Drink is widely available across New York, New Jersey, Nevada, Georgia and Connecticut, with plans to rapidly expand across the United States. Most recently, Long Drink introduced Long Drink Zero, a low calorie option, and has plans to introduce several new variants in the future.

Teller will help Long Drink as the company enters future markets in the months and years to come. Distribution in several major states is on the horizon as discussions with national distribution partners continue.

ABOUT THE LONG DRINK

‘Long drink’ is a top-selling category of alcohol in Finland–a legend that is now available in America.

The roots of ‘long drink’ go back to the 1952 Summer Games in Helsinki. The small and poor country was still recovering from World War II. Still, the Finns wanted to give tourists an unforgettable experience. However, the officials had a concern: how will we serve drinks quickly enough to all the visitors!? As a solution, they came up with a revolutionary idea of a new liquor drink, and so the first ‘long drinks’ were born. Finally, this legend has been brought to America by the next generation of Finns who want the world to experience the refreshing and unique Finnish Long Drink. The Long Drink garnered a Gold Medal (94 Rating) at the prestigious 2019 New York International Spirits Competition (NYISC). The Long Drink is currently available in Connecticut, Georgia, Nevada, New York and New Jersey.