On Sept. 25, 2020, approximately 60 World War II aircraft, called warbirds, will take to the skies over Washington, D.C. to commemorate the 75th anniversary of the end of World War II. 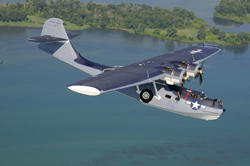 The Military Aviation Museum will be partaking in the Second Arsenal of Democracy Flyover over Washington, DC. The Museum’s aircraft featured include: Hawker Hurricane, Supermarine MK-IXe Spitfire, Grumman FM-2 Wildcat, De Havilland Mosquito, FG-1D Corsair, Curtiss P-40 and PBY-5A Catalina. The warbirds will fly in historically sequenced formations representing the war’s major battles, from Battle of Britain through the final air assault on Japan and concluding with a missing man formation. The formations will fly in two-minute intervals at an altitude of 1,000 feet.

More than 20 different types of vintage military aircraft are expected to participate in the flyover. Aircraft are being provided by multiple organizations and individuals whose mission is to preserve these historic artifacts in flying condition. Some of the historic aircraft expected to participate include the P-40 Warhawk, P-39 Airacobra, P-51 Mustang, F4U Corsair, B-25 Mitchell, B-17 Flying Fortress, B-29 Superfortress, and many others.

The live-streamed broadcast, with narration, will honor this historic anniversary and pay homage to those who served on the frontlines and on the home front during World War II will begin at 10:30 a.m. Eastern at http://www.ww2flyover.org or on Facebook at https://www.facebook.com/ww2flyover. The event organizers of the Arsenal of Democracy are General Aviation Manufacturers Association (GAMA), National Air Traffic Controllers Association (NATC), International Council of Air Shows (ICAS) and the Commemorative Air Force (CAF).

The World War II Victory Commemoration Flyover formations are scheduled to begin over the Lincoln Memorial in Washington, D.C. The airplanes will fly north to south down the Potomac River and then east along Independence Avenue and over the National Mall at approximately 11:30 a.m. Eastern.

The event will be live-streamed on the AOD’s website http://www.ww2flyover.org , Facebook and YouTube social media channels. For those in the Washington, D.C. area, the flyover may also be viewed from locations along the flight route. Plans call for a narration to be broadcast at the National World War II Memorial and selected areas along the Mall.

For more information or questions, call the Military Aviation Museum at 757- 721-7767 or go online to http://www.militaryaviationmuseum.org. Museum Aircraft participating in the flight are departing the Museum location in Virginia Beach at Noon on Tuesday September 22nd to travel to their staging areas, and are available to be filmed. Pilots and members of the Museum Staff are also available for on-camera interviews between 10am – 11am.

About the Military Aviation Museum:
A 501 (c)(3) not-for-profit organization, the Military Aviation Museum is home to one of the world’s largest collections of airworthy military aircraft from the first 50-years of flight. Truly a living museum, its aircraft are in restoration at facilities around the world. Besides the main Museum the Virginia Beach complex features additional exhibition spaces, including a mid-1930s Luftwaffe hangar, originally from Cottbus, Germany, which now serves to house the Museum's collection of WWII-vintage German aircraft. Additional structures include the WWI Hangar, and the original control tower from RAF Goxhill built in England in 1942. Visit http://www.militaryaviationmuseum.org for more information or call 757-721-7767.