Millard Grimes’s new book “The Last New Dealer" is a fictional, historical saga written in a newspaper style, which makes it easy to digest for the average reader

In 1992, a “no-shot” candidate runs for president in the New Hampshire Democratic Primary, while telling the story of how the United States evolved from 13 small, scattered, quarreling British colonies along the Atlantic Coast into the most powerful nation in history. 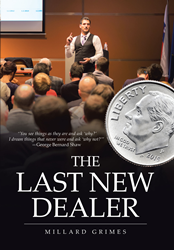 Millard Grimes spent his entire sixty-year career in the newspaper and magazine business and has now completed his new book “The Last New Dealer": an intriguing work with a definite, clear and unique message.

Grimes writes, “The threat of a third-party effort by Ross Perot throwing the election to the House of Representatives, persuades the candidate to withdraw and support the better financed and organized Bill Clinton for the November election. Its characters are well-defined, and its narrative plausible in the final analysis. It is anti-war, pro-democracy and advocates political campaigns without a lot of consultants and image-makers.”

Published by Page Publishing, Millard Grimes’s riveting work explores the varied personalities of the candidate and his handful of helpers, who include a recovering alcoholic who once worked for Jimmy Carter’s campaign; a young waitress, who was a star basketball player in high school, but fell into a deep depression caused by an episode in her senior year; a retired New Hampshire newspaper publisher; plus some former employees from his years as a newspaper publisher.

The candidate manages to win the most votes on Primary night. He goes from New Hampshire, to win the Maine caucus, the Georgia Primary and following an assassination attempt which kills one of his associates, he wins Florida and comes close in New York, making him the leading candidate for the Democratic nomination. The candidate stresses that the strong U.S. central government is still the best one ever conceived and that it is “the answer, not the problem,” and has been the essential factor in the nation’s three great transformative crises: the American Revolution in which the colonies declared independence from England; The Civil War, which established that the states were indeed one nation, not just a collection of “un-united” states; and thirdly the New Deal, which rescued the U.S. from economic depression, prepared it to be the decisive power in winning World War II, and laid the foundation for the modern U.S. and, to a great extent, the modern world.

Readers who wish to experience this fast-paced work can purchase“The Last New Dealer" at bookstores everywhere, or online at the Apple iTunes Store, Amazon, Google Play, or Barnes and Noble.