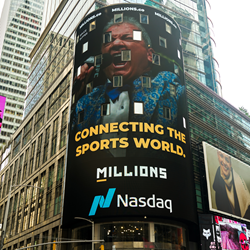 Now is a critical time for pro-athletes to engage with fans on deeper levels through paid video interactions, video streaming and personalized merch. MILLIONS is bridging the gap between millions of sports fans around the world and the athletes they follow.

MILLIONS.co, a social commerce platform for professional and semi-professional athletes to engage with and monetize their audience using video and merchandise on a single platform, announced today that it has secured $10M in funding led by Boston-based Volition Capital. Notable investors joining this round include Cody Fauser, former CTO of Shopify and Aydin Mirzaee, CEO of Fellow.app who sold his previous company to SurveyMonkey. Alongside this funding round, MILLIONS has secured strategic partnerships with several notable sporting organizations such as; CAA Sports, the influential sports talent agency; the Professional Fighting League (PFL), and First Round Management. The investment will be used to accelerate MILLIONS’s growth with key hires, market expansion, and added platform functionality to empower athletes to leverage their social networks to drive growth and engagement. MILLIONS will also be launching the “MILLIONS Gives a MILLION” signing bonus campaign available to all professional, NCAA and Olympic athletes.

The company has quickly attracted thousands of rising stars within the sports entertainment world since launching only five months ago, becoming one of the fastest-growing social commerce platforms in the sports world. As MILLIONS continues to partner with some of the biggest names in sports, this latest funding round is projected to accelerate growth into key new markets within the sports industry with $10 million in funding.

“We’re proud to be working with Volition Capital. Our vision is a world where any athlete can build and monetize their brand online through digital and physical products on a single platform,” said Matt Whitteker, CEO and co-founder of MILLIONS. “Now is a critical time for pro-athletes to engage with fans on deeper levels through paid video interactions, video streaming and personalized merch. MILLIONS is bridging the gap between millions of sports fans around the world and the athletes they follow.”

Launched in May 2021, MILLIONS enables any athlete to leverage their existing fan base and social media followers to create and control their own revenue streams. To date, MILLIONS has gained notable traction in the professional sporting world, forming partnerships with thousands of professional athletes and 100s of NCAA athletes, and has attracted globally recognized talent such as Quinton ‘Rampage’ Jackson, UFC announcer Jon Anik, the most recognizable voice in sports history Michael Buffer, upcoming superstar and Bellator Featherweight World Champion A.J. McKee, and MMA legends Bas Rutten and Din Thomas.

“I see this as a long-term project to make it the leading social commerce video platform, which connects the sports world to their fans,” said MILLIONS co-founder and veteran Octagon announcer Bruce Buffer. “The beauty about MILLIONS is that we're going to build this so it's for every athlete out there. You could be a volleyball player, baseball player, football player—it applies to everybody.”

MILLIONS is on the forefront of social commerce and fan engagement of the rapidly growing shift from traditional “passive” media to a world where sports fans want to engage on a deeper level with pro-athletes, by showing support and fostering an “entourage” environment as they advance in their careers.

Sean Cantwell, Managing Partner at Volition Capital said, “Athletes are always looking for ways to connect on a deeper level with fans, generate additional revenue streams and build their personal brands and MILLIONS offers all of this on a single platform. We think that MILLIONS is the future of fan engagement.”

Now MILLIONS is expanding into other sport categories including football, basketball, soccer and more. Video streaming and social commerce has accelerated within sales and marketing, as MILLIONS combines the best aspects of platforms like Cameo, Twitch, Patreon and Shopify into a single powerful fan engagement platform.

“The world is shifting from broadcast to narrowcast as younger sports fans look to interact directly with the athletes they follow. The TikTok and Instagram generation are no longer satisfied with just watching sports passively on traditional broadcast platforms such as ESPN, they want to connect with, interact and support their athletes directly and MILLIONS enables this in a fun and interactive way,” said Adrian Salamunovic, co-founder of MILLIONS. “In just a few minutes any pro-athlete can set up their own fan engagement page that combines custom merch, interactive paid video products with no upfront cost on a single page. This is a very powerful tool that empowers athletes to connect directly with their fans while creating new, lucrative revenue streams.”

As MILLIONS continues to court new partnerships with athletes from different sporting leagues, the company is looking to invest part of this funding into hiring fresh talent to help sustain their growth, particularly within product development.
To learn more about MILLIONS and how they are helping athletes supercharge their careers, visit http://www.MILLIONS.co.

MILLIONS is a powerful end-to-end social e-commerce and interactive video platform for professional athletes to sell custom branded merchandise and connect with millions of sports fans around the world. MILLIONS.co combines the power of social media, personalized video interactions, and e-commerce on a single platform to empower athletes to connect on a deeper level with their fans while creating new, lucrative revenue channels. For more information, visit http://www.millions.co or follow us on Instagram @millionsdotco

Volition Capital is a Boston-based growth equity firm that principally invests in high-growth, founder-owned companies across the software, Internet, and consumer sectors. Founded in 2010, Volition has over $1.1 billion in assets under management and has invested in over 30 companies in the United States and Canada. The firm selectively partners with founders to help them achieve their fullest aspirations for their businesses. For more information, visit http://www.volitioncapital.com or follow us on Twitter @volitioncapital.