19 Songs Including Her Biggest Hits, Previously Unreleased Gems, A Few Of Mindi’s Personal Favorites, And Her Brand New Song “April” Along With A 16-Page Booklet Of Personal Liner Notes and Photos From Mindi’s Archives Featuring Gregg Allman, Keb’ Mo’, and Booker T. Jones 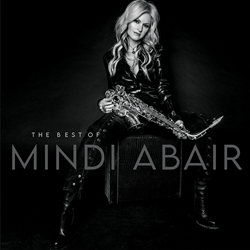 During her remarkable 21-year recording career, Mindi Abair has garnered 2 GRAMMY Nominations, recorded with some of the biggest names in music, and built a substantial following among jazz and blues audiences with her soaring melodies and powerhouse style. The Best of Mindi Abair is a 19-song collection of her biggest hits, previously unreleased gems, a few of Mindi’s personal favorites, and her brand-new song “April.” It features a 16-page booklet of personal liner notes written by Mindi, and photos spanning her career drawn from her archive. Smooth jazz hits like “Lucy’s,” “Bloom” and “Come As You Are” appear as radio edits, available here for the first time, so you can listen as you originally fell in love with them on the radio. “Make It Happen,” written and recorded with legendary soul icon Booker T. Jones, has never been released until now. Other inspired collaborations include “I’ll Be Your Home” featuring Keb’ Mo’, “Just Say When” penned and recorded with Gregg Allman, and her woman-powered blues anthem “Pretty Good For A Girl” featuring guitar hero Joe Bonamassa. Fan favorite “Be Beautiful” checks into the compilation, as does a previously unissued take on the John Lennon classic, “Imagine.” “I Love To Play The Saxophone” and “Good Day For The Blues” hail from her albums as Mindi Abair and The Boneshakers, and the brand-new song, “April,” recorded as the world was shutting down in 2020 rounds out the collection. It brings Mindi's path full circle as it’s an instrumental reminiscent of her classic hits and provides the perfect jumping off point for the next chapter to begin. Follow the arc of Mindi’s unique musical journey with this 19-song collection featuring songs from 11 different albums, 8 unique tracks that have never been available to the public before now, 28 stunning photos, and Mindi telling her story in her own words … a must for any Mindi fan.

The Best of Mindi Abair

One of the most recognized and sought-after saxophonists, two-time GRAMMY nominee Mindi Abair has been electrifying audiences with her dynamic live performances and sax prowess since her debut album in 1999. No one since Junior Walker has brought saxophone and vocals in one package to the forefront of modern music. In 2014, Mindi received her first GRAMMY nomination in the Best Pop Instrumental Album category with Summer Horns, a super group comprised of Mindi, Dave Koz, Gerald Albright and Richard Elliot, followed by a 2015 GRAMMY nomination for Best Contemporary Instrumental Album for her solo LP Wild Heart featuring the late Gregg Allman, Joe Perry, Trombone Shorty, Booker T. Jones, Keb’ Mo’, and Max Weinberg.

You might know her as the featured saxophonist on American Idol, sitting in with Paul Shaffer on The Late Show with David Letterman and The Roots on The Tonight Show Starring Jimmy Fallon, or as the first solo saxophonist touring with Aerosmith since 1973. She has garnered twelve #1 radio hits in the jazz and blues world, two #1 spots on the Billboard Contemporary Jazz Album Chart and two #3 spots on the Billboard Blues Album Chart. In 2018, Mindi Abair and The Boneshakers won 8 Independent Blues Awards including Artist of the Year and Best Blues Song fan award for the Independent Music Awards for “Pretty Good For A Girl” featuring Joe Bonamassa. They won the 2019 LA Critics Award for Best Holiday Album for All I Got For Christmas Is The Blues. And in 2019, 2020, and 2021 she was nominated by the Blues Music Awards as the Best Instrumentalist: Horn.

Mindi wrote the book “How To Play Madison Square Garden – A Guide To Stage Performance,” and served 10 years as an LA Chapter Governor, President and National Trustee for The Recording Academy.