Michael and Lindsey Weber were at a crossroads in their careers when they were working in Boston and unhappy with their jobs. They decided to franchise with Minuteman Press and become second generation entrepreneurs, and are now entering their 12th year in business. 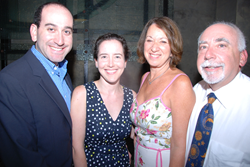 We also liked the printing industry because so much of the work is based on reorders. We knew that we could grow the business steadily if we kept our customers happy.

Steve and Gail Weber opened their first Minuteman Press center in Norwich, Connecticut in 1992. In 2004, Michael and Lindsey Weber followed suit with a franchise of their own in Enfield. Today, the Webers own four franchises combined in Connecticut and Massachusetts.

Today, Michael and Lindsey Weber are looking forward to entering their 12th year in business in 2016 with the Weber family celebrating 24 years in business with Minuteman Press as a whole. This is how they got here.

At a crossroads after college

As the oldest of three children in the family, Michael Weber recalls helping his father Steve at their original Minuteman Press location in Norwich when it first opened. These early memories helped plant the seeds to second generation franchise ownership, which later came to fruition when Michael and Lindsey Weber found themselves at a crossroads after college.

Michael recalls, “We were both working in Boston and while we loved the city, we were unhappy in our jobs. I had an MIS degree but graduated at a time when many IT companies were collapsing. Lindsey had a marketing degree but wanted to change industries.”

While Michael and Lindsey were weighing their career options, Gail and Steve happened to mention that an existing Minuteman Press franchise in Enfield, Connecticut was for sale. “The Enfield location was too far from Gail and Steve’s existing location for a regular commute, so they were not planning to pursue it. We saw it as an opportunity to make a big change and work for ourselves,” says Michael.

One of the primary reasons that Michael and Lindsey Weber chose to buy their first Minuteman Press franchise in Enfield was because of Michael’s unique perspective of growing up with the business as part of his early life. The fact that Minuteman Press treated his parents like genuine partners in business did not go unnoticed: “We saw Gail and Steve’s success with Minuteman Press, and believed that it was an honest and reputable company.”

Michael adds, “We also liked the printing industry because so much of the work is based on reorders. We knew that we could grow the business steadily if we kept our customers happy.”

Support through all stages of growth

As a second generation owner, Michael Weber understands both the benefits of franchising as well as the benefits of franchising with Minuteman Press. “The Minuteman Press support staff has always been available to us when we need assistance, from the first few weeks and through all stages of growth. The local support team has helped with everything from interviewing new staff members to training our outside salespeople. Meanwhile, the vendor relationships fostered by the Minuteman Press support staff have saved us countless hours of research and negotiating.”

“I am proud of Michael and Lindsey for how hard they work and all they’ve accomplished as part of the Minuteman Press franchise system,” says Ron Rubin, Minuteman Press regional vice president for New England. He adds, “It is especially rewarding to see second generation owners like Michael and Lindsey come to us with the desire to go into business for themselves, which is a testament to the types of long-term relationships we believe in building with our owners and their families.”

In July 2013, Michael and Lindsey Weber opened their second Minuteman Press center in West Springfield, Massachusetts. “We have had great success with growth through acquisition,” says Michael. “Our second location was the result of a significant acquisition, and we decided to keep the location open to house the existing equipment and staff.”

Michael’s day at the office starts early in the morning, when he handles quotes, emails, and paperwork before the rest of the staff arrives. He holds a regular meeting with the entire staff. He schedules several mornings each week for outside sales calls or customer phone calls. During the day, he also processes quote requests and manages production. Sometimes his day ends with a board meeting or networking event, but he is often home for dinner with the family by 5:30.

Being a Minuteman Press business owner enables the Webers to have a very flexible schedule. “We have altered our schedule based on the needs of our young family, and we never have to miss a school or sports event,” says Michael. “The work obligations still exist, but we are not tied down to a 9-5 desk job. Our work environment is also very dynamic because we print different types of jobs every day. Each job and customer is unique.”

Because of their ability to have a flexible schedule and weekends off, the Webers enjoy their time off with the family. “We love to take day trips with our children, whether we go to the country or the city. We always find fun adventures and place to explore.”

Inspirational quote + Advice for others

Asked to pick out one inspirational quote that has helped him throughout his journey as an entrepreneur, Michael Weber offers up the following line from Maya Angelou: “‘At the end of the day people don’t remember what you said or did, they will remember how you made them feel.’”
Michael also has some valuable advice for other business owners: “Think long-term instead of getting overwhelmed by the day to day tasks. You can hire people to do the manual labor. You should focus on growing your business.”

He adds, “Write down your task list, whether on paper or your computer. You are more likely to stay organized and focused with a task list. Take a moment to review your progress at the beginning and end of the day.”