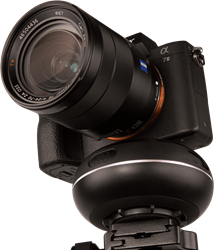 Today, MIOPS, the leading producer of creative photography equipment, including one of the most popular Camera Trigger MIOPS Smart+, launched its latest product - the MIOPS Capsule 360 - the world’s most versatile and compact motion box ever created.

The Capsule 360 enables users to quickly produce professional motion time-lapse videos and footage with smooth automated pan, tilt, and slide movements (or any combination of them). Motion can be set with its user-friendly app and executed repeatedly for impressive, consistent, visual effects. Compatible with any DSLR, mirrorless or smartphone, the Capsule 360 provides accurate object tracking, making it ideal for self-shooting vloggers looking to improve their production values. The Capsule360 also has features for producing high-quality 360° product photography and motion time-lapses.

MIOPS Capsule 360 is the ideal companion for filmmakers and photographers who want to go further than ever before with their projects,.

MIOPS Capsule 360 and its features can be used for different types of photography and videography:

The Capsule 360 is designed to allow users to quickly create perfect motion for video clips. Straight out of the box, the Capsule 360 will produce smooth pans, while the optional L-Bracket for tilt motion or or the Capsule Slider for smooth movements can be added. Capsule360 requires no cables and all aspects of its speed and direction can be controlled via the Capsule 360 App.

Whether you’re self-shooting a vlog and want to be able to self-track during filming, or just want a smoother method of following an object around a scene, the Capsule 360 can automatically track any object with just one click in its intuitive smartphone app.

Using the Capsule 360 application and the Capsule 360’s turntable accessory, available separately, you can program your camera or smartphone to capture 360° images of products quickly and automatically in just a few minutes.

Thanks to the unique design of Capsule 360, taking Motion Time-Lapse photographs has never been easier. With the device’s app, you can add advanced effects to your time-lapse creativity with bulb ramping, interval ramping, HDR, or long-exposure settings. Your options are endless.

Capsule 360 offers Cable-Free Setup and saves you from cable clutter.

About MIOPS
MIOPS creates advanced gadgets for photographers to help capture high speed events such as lightning strikes, popping balloons, breaking glasses, rocket launches etc. Thanks to its easy-to-use design, it can be used by both amateur and professional photographers. MIOPS helps photographers and videographers take spectacular photos by turning their regular cameras into high speed equipment.