This book tells the story of a woman's battle with Multiple Sclerosis and her miraculous healing. 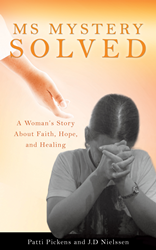 Through the pain and disease, her faith never wavered.

MS MyStery Solved: A Woman’s Story About Faith, Hope, and Healing is about author Patti Pickens’ thirteen-year battle with Multiple Sclerosis and her micraculous healing. Through the pain and disease, her faith never wavered. Because of that faith and time, she was healed of what was supposed to be an incurable disease.

Patti Pickens was born and raised in Georgia. Her Southern charm and contagious smile has always warmed the hearts of everyone around her. She led the typical life of family and career, with a touch of rebel and a great sense of adventure until her life took a turn when she fell twenty feet from a tree. That fall broke both her legs and she was told she may never walk again, not even knowing then that life had an even greater war waiting on the road ahead.

When she was diagnosed with multiple sclerosis, the real battle began. Through the years of debilitating pain, jobless, and financial ruin, she was unable to have children and had a husband who walked away. While most would give up the fight, but Patti rose up and met the challenge. Through God, and with the love of faithful friends, faith became her armor and Jesus became her shield. She never gave up hope, because she deserved to live!

Xulon Press, a division of Salem Media Group, is the world’s largest Christian self-publisher, with more than 12,000 titles published to date MS MyStery Solved: A Woman’s Story About Faith, Hope, and Healing is available online through xulonpress.com/bookstore, amazon.com, and barnesandnoble.com.