The discovery of a treasure trove of dinosaurs bones, trackways, fossilized plant life and an ancient seabed is painting a clearer picture of what the real Jurassic Period really looked like. The science is being shared in real time to inspire the next generation of scientists. 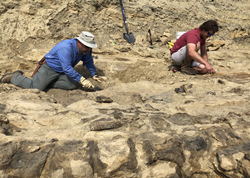 Paleontologists are uncovering a long-necked, long-tailed beast that once roamed these parts near Cody, Wyoming. She would've grown to be 80 or 90-feet.

"You can't pick up a rock and throw it without hitting a fossil. In fact, the rock you pick up is probably a fossil."Dallas Evans, Lead Curator Natural Science & Paleontology

In a land where mountains meet an ancient seabed, scientists discovered a treasure trove of fossils from the Jurassic Period. The one-square-mile plot of land is called The Jurassic Mile due to the abundance of dinosaur fossils, which represent giant sauropods, ferocious theropods, preserved plant life, trackways and buried sea life.

Dozens of scientists spent the last three months searching and digging for fossils and now some of the scientific riches they unearthed are making their way to their new home at The Children’s Museum of Indianapolis in Indiana. The tremendous collection of bones, which are expected to paint a more complete picture of what life was really like 150 million years ago, were discovered near Cody, Wyoming by a team of scientists from The Children’s Museum, which is leading the project, along with The University of Manchester(Manchester, UK), The Naturalis Biodiversity Center (Leiden, Netherlands) and The Natural History Museum (London, UK).

The fall haul of fossils is brimming with the ancient bones of long-necked, long-tailed beasts, some of which are believed to be 80-foot-long plant-eating sauropods, smaller meat-eating predator called theropods and preserved plant life. Scientists also discovered thousands of fossils known as Devil’s Toenails that are mollusks, dolphin-like creatures with eyes as big as dinner plates called ichthyosaurs and dinosaur trackways. More than seven tons of fossil material was carefully excavated and transported to The Children’s Museum of Indianapolis for preparation. More fossils are being excavated this month. As the museum receives new material, visitors will be able to view and touch some of the fossils being prepped in the newly expanded Jurassic Paleo Prep Lab, called the Polly Horton Hix Paleo Prep Lab, within the Dinosphere® exhibit at The Children’s Museum of Indianapolis. The new lab is slated to open Sept. 10, 2019. In it, children and families will be able to watch real science in the process instead of just hearing about it after the fact. A 20-year-lease procured by The Children’s Museum will allow scientists to return to The Jurassic Mile site in Wyoming over the next several years to dig for any remaining fossils.

One important clue that helps explain the vast number of bones discovered at the Mission Jurassic Site was a petrified log. The ancient piece of wood helps tell the story of how a massive pile of dinosaurs ended up in a jumbled heap at this location.

“When you begin the process of sorting evidence to reconstruct this Jurassic world, it is sometimes tough, given you are looking back some 150 million years. However, the site offers a huge amount of fossils and other data that permits us to help reconstruct the depositional event that was behind the Mission Jurassic site. We have gained great insight from the jumble of bones and logs in the channel deposit along with the wonderfully preserved bones in the pond site,” said Professor Phil Manning, lead scientist, Mission Jurassic. “We have a large variety of fossils, including fossilized plants. The different types of plants are used to help us better understand this prehistoric environment and how it has changed through time,” said Dr. Victoria Egerton, lead scientist, Mission Jurassic. Manning added, “Using information that has been locked in the sands of time, we are able to reconstruct those last moments of each corner of the site. The Jurassic Mile is giving us amazing insight to the world of the dinosaurs.” Manning went on to say that it is extremely rare to find so many bones, tracks and fossil plants all within a single site. But that is precisely what scientists have discovered within the Jurassic Mile.

“We are uncovering huge fossils that have been hidden for 150 million years. This summer’s Mission Jurassic dig season was an extraordinary example of how real science can reveal the stories of how giant, ancient beasts lived so long ago. It provides real life examples of the scientific processes we can share with children and families in our Dinosphere exhibit and throughout the world,” said Dr. Jeffrey H. Patchen, president and CEO, The Children’s Museum of Indianapolis.
While some of the specimens will be cleaned and prepared for display at the world’s largest children’s museum, other fossils will be sent to Research Casting International in Canada, which will assist with preparation and articulation. Some will be taken to SLAC (Stanford Linear Accelerator) National Accelerator Laboratory in California for further study.

High-resolution photos are available upon request. Video may be downloaded for editorial use from the following links:

Stay tuned for more to come on how this unique partnership led by the world's largest children's museum is being used to inspire the next generation of scientists. Mission Jurassic, The Children’s Museum of Indianapolis’ $27.5-million project, would not be possible without the generosity of Lilly Endowment Inc., which made a $9 million grant to support the project. Honorary Trustee Susie Sogard and her husband Jack Sogard have also made an extraordinary lead gift to support this project. Toyota generously shared vehicles to safely haul our fragile fossils in an off-road adventure to The Children’s Museum. Additional funds will be needed to create extraordinary family learning experiences resulting from the research and exploration and all institutions will be actively fundraising to make that possible. The Children’s Museum would also like to thank the museum’s official partners—Riley Children’s at Indiana University Health, Old National Bank and Ice Miller LLP.

Mission Jurassic is measuring up to be one of the biggest dinosaur recovery efforts in this hemisphere.University of Manchester student Lindsey Powell measures the scapula of a large sauropod discovered at The Jurassic Mile near Cody, Wyoming.

Brushing up on Jurassic fossils at the Jurassic Mile near Cody, Wyoming.Lead Curator of Natural Science and Paleontology Dallas Evans gives University of Manchester Lab Scientist Ed Thomas a hand with a new fossil discovery.

Islands (of fossils) in the stream may have led to this unique discovery in the Jurassic Mile.Dr. Jennifer Anne is one of many scientists from four institutions partnering on Mission Jurassic to recover ancient beasts buried long ago.

A truckload of Jurassic Period fossils arrived at the world's largest children's museum.Seven tons of Jurassic fossils will be prepped and cleaned for display at The Children's Museum of Indianapolis. The will be on display during the process in the Polly Horton Hix Paleo Prep Lab that is part of Dinosphere. There, families are invited to watch the scientific process as it actually happens.

Fossils are everywhere and in some cases are a couple layers thick at The Jurassic Mile.Mission Jurassic is led by the world's largest children's museum (The Children's Museum of Indianapolis) and involves a rich bed of Jurassic dinosaur bones.