Jack Stack and SRC Holdings Corporation only the third American company in 29 years to win the Txemi Cantera International Prize in Bilbao, Spain on behalf of SRC's 1,600 Employee Owners 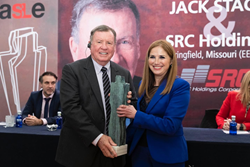 SRC and thousands of other companies that practice the Great Game of Business system around the world have found a way to create the kinds of economic opportunities everyone is looking for to close that gap between the haves and have-nots. - Jack Stack, CEO of SRC Holdings Corp.

When you travel just about anywhere throughout the world, there is a bond that brings people together: Jobs. The desire to earn a living, provide for a family, and give back to one’s community is universal. But the bonds that we all share go beyond what we do or where we work.

There’s something else we’re all searching for—a way to leverage business to help close the gap between the so-called “haves” and the “have-nots” that increasingly plagues our societies. We’re looking for a way where everyone can earn the opportunity to win and get ahead. We’re also searching for a way to make work more engaging and participatory. To give people a voice in the work that they do and to give them the opportunity to earn a reward that truly reflects their hard work. We wonder if there is a way to leverage business such that it creates a better, more equitable society that future generations can build on. In short, we’re all looking for a better way to run a business that gives every worker the chance to grab the brass ring for themselves.

It is in this spirit that the associates at SRC Holdings Corporation® in Springfield, Missouri, were awarded the 29th annual Txemi Cantera International Prize in Bilbao, Spain. For the past 37 years, SRC—which is 100% owned by its 1,600 associates—has been validating inside their “Living Laboratory” that there is indeed a better way to run a business. The leadership system they have developed and run their companies with, called The Great Game of Business, empowers workers by teaching them to think and act like owners. Not only do SRC’s associates participate in creating their future, they all reap their rewards from their shared success.

“Our Great Game leadership system has been built through our own experiences and in collaboration with thousands of other companies,” said Jack Stack, CEO of SRC, who accepted the award on behalf of SRC’s associates. “It is the result of opening up our company and our books to our associates. It is the product of teaching our associates to do more than just build great products; we give them the information and the opportunity to build great companies. By doing so, we continue to create a business of businesspeople who can now share wealth and prosperity within their communities around the world.”

By leveraging their Great Game of Business, SRC and the thousands of other companies who practice the system around the world have found a way to leverage the universal opportunity of business to create the kinds of economic opportunities everyone is looking for to close that gap between the haves and the have-nots.

The Txemi Cantera award was created in 1991 in honor of Jose Miguel Cantera Sojo, nicknamed Txemi, for his commitment to creating better places to work. Cantera, who died in 1991 at the age of 41, was an economist and a “socially committed leader who always understood that life is not only cultivating your plot, but also about helping others cultivate their plots.”

The award named for him recognizes those organizations that support workers and reinforce the values of cooperation, solidarity, participation, and equitable sharing of wealth.

For the past 29 years, organizations from around the world who embody these values have been recognized with this prestigious award—which also includes a stunning sculpture created by the renowned Basque artist, Agustin Ibarrola. Winners are selected by a panel consisting of members of the Basque government, the Gezki Institute, the Institute for Cooperative Studies at the University of Deusto, and the local Department of Economic Promotion.

The award committee is led by members of ASLE, a non-profit organization created by Josetxo Hernández in 1982 that promotes worker-owned companies—in particular, so-called “labour societies,” which are a specific form of corporation in the Basque Country where employees buy and hold equity in their company. Today, ASLE represents 260 organizations representing more than 6,000 employee-owners.

By winning the award in 2020, SRC became just the third American company to be honored following United Airlines in 1997, after it granted 55% ownership to its employees through an employee stock ownership plan (ESOP), and Corey Rosen of the National Center for Employee Ownership (NCEO) in 2009 for his organization’s role in helping create and promote employee-owned companies in the U.S.

In accepting ASLE’s offer to travel to Bilbao to accept the award on behalf of his associates, Stack also had the honor of meeting with Iñigo Urkullu Rentería, the president or Lehendakari of the Basque region of Spain. In their discussion, the two leaders connected over the importance of broad-based employee ownership, creating good jobs, and offering personal economic development opportunities for workers as a way to create healthier and more sustainable communities around the world.

Stack capped off his visit to Bilbao by giving a keynote presentation at the University of Deusto, where he shared his own journey to find a better way to run a business and how The Great Game of Business leadership system he and his associates have created might finally be the answer that so many people around the world have been looking for when it comes to closing the gap between the have and the have-nots.

Jack Stack is President and CEO of SRC Holdings Corporation, which remanufactures gasoline and diesel engines for the automotive and off-highway markets, distributes engine kits, manufactures power units and remanufactures electrical components, and conducts seminars and training programs specializing in all aspects of teaching people how to implement open-book management. He is also the author of three books, The Great Game of Business, A Stake in the Outcome, and Change The Game: Saving The American Dream By Closing The Gap Between The Haves And The Have-Nots.