Combined grants provide 8 years of funding, among largest gifts received by the arts at MIT. 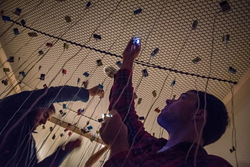 The Mellon Foundation has an unparalleled role in funding pioneering programs in the arts and humanities, and this gift is a wonderful affirmation of the central role of the Arts at MIT, CAST’s mission, and of MIT’s strong heritage in this domain.

The MIT Center for Art, Science & Technology (CAST) has received $1,500,000 from the Andrew W. Mellon Foundation, in support of the Center’s role as a catalyst for multidisciplinary creative experimentation and integration of the arts across all areas of MIT. The recent grant brings the Mellon Foundation’s total support for CAST to $3,000,000, among the largest gifts received by the Arts at MIT.

Philip S. Khoury, Associate Provost, expressed gratitude for the Mellon Foundation’s ongoing support and recognition: “The Mellon Foundation has an unparalleled role in funding pioneering programs in the arts and humanities, and this gift is a wonderful affirmation of the central role of the Arts at MIT, CAST’s mission, and of MIT’s strong heritage in this domain. We are enormously grateful for the Mellon’s ongoing support, which will enable us to expand.”

The Center brings outstanding artists to campus as co-creators with faculty and students and sponsors a biennial, international symposium that explores interrelated, mutually informing modes of exploration, knowledge and discovery in various domains of the arts and sciences.

Since its inception in 2012, CAST has sponsored more than 20 artist residencies, 12 cross-disciplinary courses and workshops, two concert series, and numerous multimedia projects, lectures and symposia.

CAST builds upon MIT’s 50 years of forward thinking and imaginative ways to incorporate the arts into a research institution renowned for science and engineering. György Kepes established the Center for Advanced Visual Studies in 1967, and Jerome B. Wiesner, the 13th President of MIT, fostered a broadly-based program in the arts at MIT, firmly grounded in teaching and research at the Institute. He established the Council for the Arts at MIT in 1974, one of the first organizations of its kind in a US university, and his support led to the establishment of the List Visual Arts Center and the MIT Media Lab.

In 2016, the symposium “Material Worlds” will explore recent developments in materials systems and design -- self assembly, programmable matter, transformable structures, design with biological materials -- and what cultural historians are calling a “new materialism.” The event builds upon the success of “Seeing/ Sounding/ Sensing” in 2014, which convened artists, scientists and humanists from multiple disciplines around an exploration of the arts and cognitive sciences.

The Institute has long been known for its strong music and performing arts program, and nearly 50 percent of all science and engineering undergraduate students enroll in music and theater classes each academic year. MIT Sounding, a performance series recently launched by CAST and curated by Evan Ziporyn, composer and faculty director of the Center, includes new work commissioned by MIT and has already reinvigorated the musical landscape in the Boston area.

Terry Riley, the legendary founder of Minimalist music, participated in a marathon concert on April 18 in celebration of his 80th birthday, which included the premiere of a reimagined classic — a multi-saxophone, live version the 1969 Poppy Nogood and the Phantom Band, newly arranged by Evan Ziporyn.

Tomás Saraceno will discuss the vision, arachnology, structural ingenuity and collaborative research with MIT professor Markus Buehler that inform the installations created with spider webs on view in New York through May 2 at MIT’s “Active Matter Summit” on April 24-25.

Emmy award-winning documentary filmmaker Katerina Cizek will present Highrise: Universe Within, Live, on April 29 at Toronto’s HotDocs Film Festival. The final chapter in the acclaimed digital documentary project was created during a two-year residency at MIT with the OpenDocLab.

For a recent exhibition at The Kitchen in New York and a show at the MIT List opening May 22, artist Anicka Yi worked with Tal Donino, a postdoctoral fellow in bioengineering at MIT, to develop strange and pungent works cultured into a “collective bacterium.”