‘Adoptee Night’ is a Special Night for All Who are Touched by Adoption and Foster Care with Goal to Send 1,500 Adopted and Foster Youth to Attend Their First MLB Baseball Game 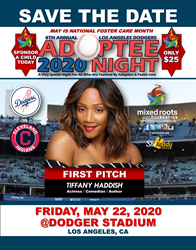 I grew up in foster care here in Los Angeles, so along with my home team and a cause that is very close to my heart - I look forward to seeing all the smiles on the kids faces at the game

Mixed Roots Foundation is proud to announce its new partnership with Actress, Comedian, Author and Philanthropist, Tiffany Haddish and the She Ready Foundation where they will team up for Mixed Roots Foundation’s 9th season signature of MLB ‘Adoptee Night’ sporting events that will take place during May for National Foster Care Month. This year’s lineup will include kicking off National Foster Care Month with the 2nd Annual New York Yankees again on Tuesday, May 5th, and for the first time hosting the 8th Annual Minnesota Twins (Monday May 18th) and 6th Annual San Francisco Giants (Tuesday, May 19th) in May, and will close out May and its MLB ‘Adoptee Night’ season with Tiffany Haddish throwing out the First Pitch at the 8th Annual Los Angeles Dodgers at Dodger Stadium on Friday, May 22, 2020.

Since Mixed Roots Foundation’s inaugural ‘Adoptee Night’ in 2012 with the San Francisco Giants, ‘Adoptee Night’ to date has expanded nationwide and has sponsored over 11,000 adopted, foster youth and their families to attend their first MLB baseball game. In its 9th season this year, Mixed Roots Foundation, Tiffany Haddish along with the She Ready Foundation will continue this special night to those touched by adoption and foster care and will provide a special opportunity for attendees to learn about adoption and foster care resources in the greater community and just having fun with those who are like them.

“I am so honored and excited to partner with Mixed Roots Foundation and participate in their Los Angeles Dodgers ‘Adoptee Night’ where I will be throwing out the First Pitch for the first time at an MLB game”, said Tiffany Haddish, Actress, Comedian, Author and Founder of She Ready Foundation. “I grew up in foster care here in Los Angeles, so along with my home team and a cause that is very close to my heart - I look forward to seeing all the smiles on the kids faces at the game…I am proud that I can be a voice for these youth and hope through the She Ready Foundation, we can make a positive impact and let these kids know they are not alone.”

In addition to partnering with Tiffany and the She Ready Foundation, Mixed Roots Foundation will also partner with several other individuals, local businesses and organizations in the greater community to assist in the recruitment of mixed, adopted, foster youth and their families as well as help raise funds and reach the goal of sending 1,500 adopted and foster youth to attend their first MLB baseball game.

Mixed Roots Foundation and the She Ready Foundation will also host a pregame VIP reception at each of the games where individuals will have the chance to meet and greet special guests along with networking with valued community partners and sponsors. Official marketing and promotions of each game will be begin in early April 2020.

General tickets will cost $30 and VIP Tickets will cost in the range of $75 - $150 that will include a game ticket, food and beverage, VIP seating, rally towel, VIP Slap band and a chance to win various silent auction donated items.
A portion of ticket sales will benefit Mixed Roots Foundation and the She Ready Foundation that further supports mentoring and resources for adopted, foster youth and their families. To become a community partner or sponsor, please contact 213.725.8054 or email sponsor@mixedrootsfoundation.org. To donate or sponsor a kid for $25, visit crowdrise.com/mixedroots. To volunteer or learn more about the event, please email events@mixedrootsfoundation.org or visit mixedrootsfoundation.org for more information.

About Tiffany Haddish
With multiple high-profile projects and buzzworthy appearances to her name, Tiffany Haddish has quickly established herself as one of the most sought-after comedic actresses and performers. She can currently be seen opposite Tracy Morgan on the TBS comedy series The Last O.G. and as host of Kids Say The Darndest Things on ABC. She will next star opposite Octavia Spencer in the Netflix limited series Self Made: Inspired By The Life of Madam C.J. Walker, set to debut on March 20. Her additional upcoming film and television projects include Down Under Cover (opposite Chris Hemsworth), Here Today (opposite Billy Crystal) and Bad Trip (opposite Lil Rel Howery). She also has a first-look deal with HBO for projects under her production company banner, She Ready Productions.

Haddish is perhaps best known for her breakout role in the smash comedy Girls Trip, where she appeared as the scene-stealing “Dina” alongside Jada Pinkett Smith, Queen Latifah, and Regina Hall. Her additional film and television work includes Like A Boss,The Kitchen, Between Two Ferns: The Movie, Tuca & Bertie, The Secret Life of Pets 2, The Lego Movie 2: The Second Part, The Angry Birds Movie 2, Night School, Nobody’s Fool, The Oath, Uncle Drew, The Carmichael Show, Keanu, Real Husbands of Hollywood, and New Girl. Haddish was also an early stand out during her appearances on Def Comedy Jam, Who’s Got Jokes, and Reality Bites. In June 2018, Haddish took the reins as the highly-anticipated host of the MTV Movie and TV Awards, a role that was met with critical acclaim and a significant ratings boost.

In addition to her acting work, Haddish continues to tour the country and perform to sold-out crowds. Her newest one-hour comedy special, Tiffany Haddish: Black Mitzvah, debuted on Netflix in December 2019 to critical acclaim. She also served as host and executive producer of the Netflix stand-up comedy collection Tiffany Haddish Presents: They Ready, a series of half-hour comedy specials that featured her friends and long-time comedic collaborators. Her first stand-up special, Tiffany Haddish: She Ready! From the Hood to Hollywood, was released on Showtime in August 2017. Just three months after the special’s release, Haddish made history by becoming the first black female stand-up comedian to host Saturday Night Live, a role that earned her the 2018 Emmy Award for “Outstanding Guest Actress in a Comedy Series.”

Haddish’s first book, a memoir called The Last Black Unicorn, was released the following month. The book made the New York Times Best Sellers List and the subsequent audiobook, narrated by Haddish, was nominated for a 2019 Grammy Award for “Spoken Word Album.”

Haddish’s journey and life experiences have inspired her comedy and sense of humor both on and off the stage. While growing up in foster care in South Central Los Angeles, her excessive talking and imaginary friends prompted her increasingly-flustered social worker to steer her into stand-up comedy by enrolling her in the Laugh Factory’s Comedy Camp, a place for at-risk and underprivileged children to transform negative energy into something positive. The experience was just the beginning of her comedy career. She currently lives in Los Angeles.

About She Ready Foundation
She Ready Foundation’s mission is to protect, provide resources and ensure normalcy for foster children through sponsorship, suitcases, mentoring, and counseling. The She Ready Foundation believes that foster children deserve an equal opportunity for a normal childhood. Founded by Tiffany Haddish, She has made it her goal to empower, support and encourage children living in the foster care system. She knows all too well what it’s like to move from home to home in the middle of the night with all her belongings packed in garbage bags and feel like the world has forgotten about her. We are the voice of foster children suffering in silence. She Ready Foundation’s philosophy is that "Every child that is removed from their parents deserves to have a suitcase, a safe place to lay their head, and platform to follow their dreams.” To learn more, visit shereadyfoundation.org, Follow on Facebook, Twitter, Linkedin and Instagram @shereadyfoundation.

About Mixed Roots Foundation
Mixed Roots Foundation is a 501(c)(3) nonprofit organization celebrating its 9 Year Anniversary based in Los Angeles, CA with regional offices in San Francisco, CA, Minneapolis, MN and New York, NY and serves as the first and only national / global multicultural foundation for adoptees and their families representative of the international, domestic, and foster care adoption experience and improves the lives of those touched by adoption and foster care by leveraging philanthropy and grassroots fundraising to support important post-adoption resources including mentoring, DNA testing and unique scholarships/grants for adoptees, foster youth and their families. For more info, visit mixedrootsfoundation.org, Follow on Facebook, Twitter and Instagram @mixedroots.