Mo Rocca To Host The 25th Annual Audie Awards®, A Night Of Celebration For Achievement In Audiobook Excellence 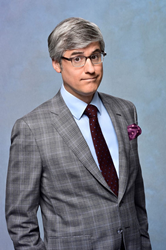 The Audie Awards® is recognized as the most prestigious award in audiobook and spoken word entertainment. Mr. Rocca is a CBS Sunday Morning correspondent, author, and audiobook narrator of his book MOBITUARIES: Great Lives Worth Reliving (Simon & Schuster; 2019) and podcast of the same name.

The Audie Awards®, recognized as the most prestigious award in audiobook and spoken word entertainment, will include winners in 24 competitive categories, including the Audiobook of the Year, from over 1300 submissions. 2020 also marks the 25th anniversary of the Audie Awards®, a celebratory milestone that caps a period of tremendous growth and popularity for the audiobook storytelling format.

“After spending three days talking into a microphone to record my own audiobook, I've fallen in love with the sound of my voice," says Rocca. "Settle in because it's going to be a long night."

“We are thrilled that Mo Rocca will be the master of ceremonies at the 25th Audie Awards®, our biggest celebration yet,” said Michele Cobb, Executive Director of the APA. “Mo’s nimble wit, prodigious charm, curious mind, and appreciation of good storytelling is the perfect mix for this big anniversary year celebration of authors, narrators, and audiobook publishers.”

Mr. Rocca is the author and audiobook narrator of the recent New York Times bestseller, MOBITUARIES: Great Lives Worth Reliving (Simon & Schuster; 2019) and wildly successful podcast of the same name. The New Yorker says of the book: “In our fact-challenged times, Rocca’s joyful tour through the “didja know”s of history is an unexpected antidote.”

Mr. Rocca is also a correspondent for CBS Sunday Morning, host of The Henry Ford’s Innovation Nation, and host and creator of the Cooking Channel’s My Grandmother’s Ravioli, in which he learned to cook from grandmothers and grandfathers across the country. He’s a frequent panelist on NPR’s hit weekly quiz show Wait Wait…Don’t Tell Me! Rocca spent four seasons as a correspondent on Comedy Central’s The Daily Show with Jon Stewart. Mr. Rocca began his career in TV as a writer and producer for the Emmy and Peabody Award–winning PBS children’s series Wishbone. As an actor, he starred on Broadway in The 25th Annual Putnam County Spelling Bee. Mr. Rocca is the author of All the Presidents’ Pets, a historical novel about White House pets and their role in presidential decision-making.

In early February, the APA will announce the full list of Audie Awards® finalists. Bookmark http://theaudies.com for more information.

AUDIE AWARDS® The Audie Awards® is the premier awards program in the United States recognizing distinction in audiobooks and spoken-word entertainment. Publishers and rights holders enter titles in various categories for recognition of achievement. Finalists are selected, and from that group of finalists one winner is awarded. The Audie Awards® is a registered trademark of the Audio Publishers Association.

ABOUT THE APA The Audio Publishers Association (APA) is a not-for-profit trade organization whose primary goals are to promote awareness of the audiobook industry, gather and disseminate industry statistics, encourage high production standards and represent the interests of audiobook publishers. Since 1986, the APA has worked to bring audio publishers together to increase interest in audiobooks. For more information on attending The Audies: https://www.audiopub.org/members/audies