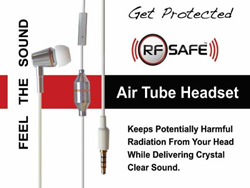 An investigative documentary that explores the potential long-term health effects from cell phone radiation including brain cancer and infertility.

According to RF Safe, an official commercial release date has been set for "Mobilize - a Film About Cell Phone Radiation", October 14th, 2014. It is an investigative documentary that explores the potential long-term health effects from cell phone radiation including brain cancer and infertility. This thought provoking film examines the most recent scientific research and the challenges politicians face trying to pass cell phone safety legislation.

Through interviews with expert researchers, major mobile associates, and prominent politicians, Mobilize presents a balanced and insightful observation about this unspoken health issue.

Most cell phone manuals come with fine print instructions on how to use the phone safer in regards to radiation. A majority of manuals tell consumers to keep the phone about an inch away from the body at all times

While the vast majority of studies on cell phone radiation do not show a biological effect, researchers have found that studies conducted over 10 years or longer show an increased risk of brain cancer for heavy users.

Researchers analyzed hundreds of studies on cell phone radiation and discovered that if you separate out the studies based on their funding source you find two distinctly different patterns. The independently funded studies tended to find a biologic effect while the industry funded studies did not.

Studies conducted around the globe have shown that children's brains absorb more radiation from cell phones. This is due to children's thinner skulls and developing brains.

1) Replace the hands-free headset that came with your cell phone with an RF Safe Air-Tube Headset.

2) Use a Pocket Shield or RF Safe Shielded Flip Case to block phone radiation when carrying the cell phone near your body.