Mochavation has made his mark on the radio airplay charts by leveling the playing field with his hot new single, "Cooler". Mochavation has sustained various positions on the radio charts for several weeks, which enabled him to peak at No. 4 on the Global Top 150 Independent Airplay Charts as reported by Digital Radio Tracker. 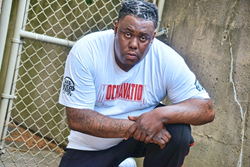 Mochavation has managed to outperform several major artists to earn a spot on the radio airplay charts, which is usually a difficult task for any new indie artist.

Hip Hop and R&B artist, Mochavation is making a lot of noise, not only in music news where he has been featured in Hip Hop Weekly Magazine in April, but also in radio - where his music continues to climb the airplay charts worldwide, with overseas radio markets streaming his music.

HHP Entertainment, Moch's record label, had to push his single release to an earlier date, due to the global corona-virus pandemic, but the "Cooler" rapper managed to have his single positioned on three different global airplay charts that are monitored by Digital Radio Tracker. His label, HHP Entertainment, is a subsidiary of CW-One Music Group, LLC.

Mochavation’s hit single "Cooler," since it’s official release May 1, has charted on several radio airplay charts, where it peaked at No. 4 on the Global Top 150 Independent chart (May 16th, 2020). Mochavation has managed to outperform several major artists to earn a spot on the radio airplay charts, which is usually a difficult task for any new indie artist. Holding this position for several weeks on the charts, Mochavation has now been slated to receive a plaque as an award for this major accomplishment. Other major achievements related to radio charting includes his single reaching at No. 20 on the Global Top-50 Hip Hop and R&B chart; and No. 73 on the Global Top-200 charts, which were also monitored by Digital Radio Tracker.

Moch's single has been receiving heavy radio rotation in the South and South East markets - in major cities like Texas, Miami, Atlanta, Nashville and Memphis. The International markets where he is getting radio airplay spins includes the United Kingdom, Germany, France, Sweden, Romania, Canada and Spain.

The streaming numbers have also been impressive for Mochavation, who averages over 600 plus in weekly streams on Spotify.

Top internet radio shows, podcasts and even FM stations have interviewed Mochavation. The latest radio personality to chop it up on live radio with Mochavation was Kevin Hampton, also known as "Kanodadon", on his celebrity podcast 97.9FM "The Vibe Show." Mochavation has also been interviewed by Jill Winter of Rhythm 105.9 FM, a top 40 radio station airing in Yuba City and Sacramento, California.

Do anticipate more music to be released from Mochavation and more singles to top the charts! There's no telling what his next big move is, but keep up with him and follow Mochavation on Instagram, Twitter and Facebook at: @Mochavation.