He Started It!: My Twitter War With Trump by Modern Family Executive Producer/Writer Danny Zuker, with an introduction by political satirist Paul Slansky, is now available for pre-order on Amazon and other book sellers. 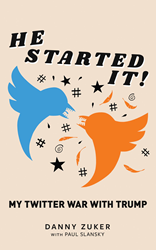 He Started It! My Twitter War With Trump by Danny Zuker with Paul Slansky

This book strangely feels like an important document now. All the childish language and the insane logic Trump used to engage me, he’s now using with world leaders. - Danny Zuker, Author, He Started It!: My Twitter War With Trump (September 2018)

Emmy Award-winning Modern Family Executive Producer/Writer Danny Zuker’s new book, He Started It!: My Twitter War With Trump (Griffith Moon) with Editor Paul Slansky, is now available for Pre-Order, and will be published on September 10, 2018. Anyone dealing with PTSD – President Trump Stress Disorder – can have some laughs with this book at the expense of the man who hates nothing more than being laughed at, while supporting three great causes being hurt by the Trump Administration.

For comic relief, Zuker presents all the entries from his legendary three-month-long Twitter War with future President Donald J Trump in He Started It!: My Twitter War With Trump. And Zuker’s hilarious commentary about these historic 2013 tweets shows how the warning signs of all the horrors in today’s never-ending Breaking News were right there all along.

“Trump thinks he’s getting the best of every exchange,” observes Editor Paul Slansky, “but in reality, he’s being eviscerated.” Here’s a sneak preview of the smackdowns Trump believed were glorious victories:

The book, He Started It!: My Twitter War With Trump, was a result of Zuker reading his tweets aloud (with Veep actor Tim Simons reading Trump’s sad! responses) at a Los Angeles fundraiser for the Puerto Rico Relief Fund. Zuker’s good friend Slansky was in the audience and instantly realized that this material needed to be captured between covers for posterity. For those stunned by the absurd rise of the least qualified and most unprincipled “leader” America has ever known, He Started It! shows that the nation elected a man-child who was 70 going on 7. As Trump himself has said, seeming to think that this was something worth boasting about, “When I look at myself in the first grade and I look at myself now, I’m basically the same. The temperament is not that different.”

PRE-ORDER
He Started It!: My Twitter War With Trump by Danny Zuker with Paul Slansky (Griffith Moon, September 10, 2018) is available for Pre-Order on Amazon, Barnes and Noble, Books-A-Million, and Indie Books
https://www.amazon.com/He-Started-Twitter-War-Trump/dp/0999845284

DANNY ZUKER @DannyZuker (AUTHOR) - When not delighting his hundreds of thousands of Twitter followers by trolling the leader of the free world, five-time Emmy Award winner DANNY ZUKER works as a television comedy writer/producer. He’s spent the last nine years as an executive producer/writer on Modern Family and has worked on more than a dozen shows, including Evening Shade, Roseanne, Just Shoot Me, and, as Trump so cleverly tweeted at him, “so many flops.” http://hestartedit.com

PAUL SLANSKY @slansky (EDITOR) is the author of The Clothes Have No Emperor: A Chronicle of the American ‘80s and five other books that savagely mock the idiots, hypocrites and demagogues who masquerade as our “leaders.” In the summer of 2016, he created (and continues to curate) TrumpelThinSkin.com, a website dedicated to the ridiculously easy task of disrespecting Donald Trump. http://www.theclotheshavenoemperor.com

CHARITIES
To give back to the community, Zuker is donating a portion of every book sale to three charities whose causes have been hurt by Trump: Planned Parenthood, the World Wildlife Fund and RAICES (the Refugee and Immigrant Center for Education and Legal Services, which is reuniting separated families).

Writer and Editor Paul SlanskyAuthor @Slansky The Clothes Have No Emperor: A Chronicle of the American ‘80s and five other books