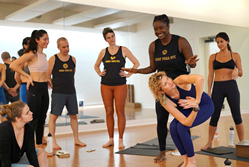 “What is so unique about Modo and Modo flow sequences is the combination of powerful strengthening and peaceful style of yoga – it is taught in a mindful way to help people to connect with themselves,” said Sarah Neufeld, co-founder of Modo Yoga NYC.

Modo Yoga NYC, an environmentally and socially conscious boutique yoga studio, announced the launch of its new masterclass mini-series ‘Going Deep: The Masterclass’ that explores the Modo and Modo Flow sequences. The series will be offered next on Saturday, March 7, in the West Village and Saturday, March 28, in Williamsburg.

Modo Yoga combines the precision of therapeutic yoga and the foundations of traditional yoga in a specially heated room. All classes are designed to be accessible to everybody. Going Deep is geared toward anyone curious about Modo Yoga, for those looking to learn modifications, and for anyone looking to deepen and strengthen their practice. Yoga students of all levels are welcome to participate.

“We are excited to offer these classes to anyone interested in refining the essentials of Modo and Modo Flow from the ground up,” said Valerie Anne Verdier, director of teaching at Modo Yoga NYC and the visionary behind the masterclass series. Verdier designed the class for individuals looking for a deeper understanding of the movement and breath that create the Modo Yoga sequences. Students will explore alignment along with foundational poses and centering.

“What is so unique about Modo and Modo flow sequences is the combination of powerful strengthening and peaceful style of yoga,” said Sarah Neufeld, co-founder of Modo Yoga NYC. “It is taught in a mindful way to help people to connect with themselves and to improve their overall well-being.”

The studio's founders strive to foster an inclusive community by creating fun, open spaces where everyone feels welcome—empowering people of all abilities to feel calm, fit and inspired.

Modo Yoga NYC is a leader in sustainability practices through green-built studios and charity support. In 2019, Modo Yoga NYC raised over $100,000 for charity partners and helped protect 27,000 acres of land in the Peruvian Amazon rainforest through a collaboration with Junglekeepers. Valerie Verdier, along with Modo Yoga NYC, and Modo Yoga Montreal, also founded KAY, a non-profit organization devoted to bringing yoga to underprivileged kids in Haiti.

ABOUT MODO YOGA NYC
Modo Yoga NYC is a community of inspired students and teachers, joined together by our love of yoga, our commitment to protecting the earth, and our drive to bring more peace into the world. We are a place for all. Whether you are an absolute beginner or a more experienced student, we offer accessible classes that are challenging, healthy and fun!
When you join our sweaty family, you join a dedicated, conscious community of over 80 studios worldwide. See you soon in the hot room!
Find Modo Yoga NYC on Instagram @modoyoganyc.
For more information, visit http://www.modoyoga.com.

The NYC-based studio refines the essentials of Modo and Modo Flow from the ground up.(Photo courtesy of Modo Yoga NYC.)