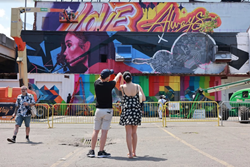 With the goal of providing a platform for local and international street artists and creating more vibrant neighborhoods, the festival will incorporate over 500,000 square feet of walls in Wynwood and Downtown Miami’s Flagler District. In partnership with NiftyGateway, Mana Public Arts will also be minting the featured works as NFT’s to be put up for auction.

“We view culture as the energy which breathes life into a community before development even starts, and sustains that life for decades,” says Moishe Mana, CEO of Mana Common. “It’s the fuel for arts and entertainment that creates breeding grounds for spontaneous interactions and exchanges.”

As the largest private landowner in Miami, Moishe Mana holds nearly 55 acres of land and 1.8 million square feet of floor space between Wynwood and Downtown Miami’s Flagler District. The visionary entrepreneur is lending the full-scale facades of dozens of buildings from downtown to Wynwood to be used as canvases for the artwork. In line with the organization’s mission to remove class-based barriers associated with museums and galleries and increase community access to arts, all murals will remain installed indefinitely.

“Every December the focus of the art world centers on Miami. Through this public art initiative, our goal is to spread international attention more equitably by engaging underserved communities by providing everyone access to free public art,” says Mana. “We’re creating a Festival that celebrates diversity, inspires valuable dialogue and creates educational opportunities beyond the week-long celebrations.”

Inaugurated in Jersey City this year, the Miami edition of the Mural Festival is part of a larger strategy to better organize and activate space for Miami Art Week and beyond. To do this, Mana Public Arts will be working with partners to develop pop-up shops and activations, activate temporary pedestrian environments, create opportunities for small- and medium-sized businesses, and develop community programs that help to expand public art in the city.

A complete list of confirmed artists and programming will be available shortly.

About Mana Common
Mana Common is a platform for neighborhood revitalization.

We believe that truly integrated neighborhoods, where residents can live, work, and play, are the wave of the future. As such, the divisions of Mana Common reflect the most basic elements upon which a community is built: Culture, Commerce, Technology, Property, Agriculture, and Social Impact.

The name, “Mana Common,” originates from our belief that our world is becoming more and more connected. Rather than focusing on our differences, our shared humanity gives us common ground, common decency, and common knowledge upon which a truly thriving community ecosystem must be built.

Using the Mana Common process, we begin building community ecosystems long before any construction begins and continue to nurture them long afterwards. This allows for rapid, meaningful, permanent vitality for a neighborhood.