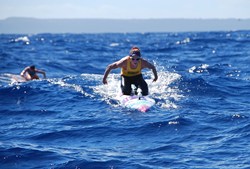 Featured in the SUP division was Oracle Team USA skipper and America’s Cup champion (2010) Jimmy Spithill, 34, who completed the race in a time of 6:09:24.

Paddleboarders in the 17th annual Molokai-2-Oahu Paddleboard World Championships (M2O), presented by Kona Longboard Island Lager today were engaged in a game of chess with the ocean as they tried to maneuver through wind and water that seemed to constantly counter every move they made in an effort to push away from the island of Molokai to the finish line on Oahu.

In the men’s standup paddleboard (SUP) division, 20-year-old Kai Lenny and 18-year-old Connor Baxter, both from Maui, took a southerly line, which appeared to be the quickest route for most of the race. While Australian Travis Grant, 30, and Scott Gamble, 37, from Oahu took a more direct approach along the Rhumb line that earned the two experienced paddlers first and second place finishes respectively. Grant completed his journey in a time of 4 hours, 50 minutes, 17 seconds and Gamble crossed the line in 5:00:53.

“This is a special place and I can say I won Molokai forever,” said Grant who thought Baxter was unbeatable. “I didn’t think I would be winning this race. I just took a straight line, conserved my energy and then they (Grant’s boat crew) told me - oh, by the way, you’re leading.”

Another Australian also claimed top honors in the women’s SUP race. After finishing third in 2012, Terrene Black, 30, becomes the first Australian woman to win the division in time of 5:40:40.

“I knew about an hour into the race that we weren’t going to be breaking any records,” said Black. “I thought, I’m just racing these girls (Jenny Kalambach and Andrea Moller) and I need to make the most out of every bump, but it was really tough.”

“It was a good race and we battled the entire way,” said Kalambach. “At one point we were lined up next to each other and I tried so hard to catch her, but I’m so happy to finish the race.”

Featured in the SUP division was Oracle Team USA skipper and America’s Cup champion (2010) Jimmy Spithill, 34, who completed the race in a time of 6:09:24.

“I’ve got the America’s Cup to race in about six weeks, so this was the last thing I could do to get out of my comfort zone and test myself,” said Spithill. “It reminded me a lot of an ocean race in sailing where at the start there’s a lot of mayhem and spectators, and then instantly you’re on your own. It was a beautiful bit of water and a great mental test.

It was Australia all the way in the prone paddleboard division. Both Brad Gaul, 34, and Jordan Mercer, 19, handily defended their men’s and women’s championships, but not without leaving everything they had in the Molokai Channel.

“There was swell, but it didn’t have the power to push you on, so you had to work the whole way,” said Gaul. “The race is something that is quite big in Australia. That was a real test out there and I’m proud to bring the title home again.”

After setting course records in her previous two championships, Jordan Mercer, 19, was uncontested in her third consecutive victory this year (6:10:00), but the young champion was visibly drained knowing she had earned every stroke she took across race’s 32 miles.

“It was the toughest time I’ve spent in the ocean, ever,” said Mercer said as she fought back a wave elation and exhaustion. “It was such a physical and mental test, but the feeling I have now is like nothing else in the world.”

A notable match up in the stock prone paddleboard race occurred between Australian Zeb Walsh, 30, and American Jack Bark, 19. The two were seen paddling side by side for much of the race - a unique site in a large body of water where close competitors can be separated by hundreds of meters. After finishing second to Bark last year, Walsh pulled ahead in the final approach to the finish line (5:46:13). Ironically, Walsh won on a Bark brand paddleboard.

For complete results, go to http://www.molokai2oahu.com.

For race day photos got to http://www.facebook.com/molokai2oahu

About the Molokai-2-Oahu Paddleboard World Championships
Founded in 1997, the Molokai-2-Oahu Paddleboard World Championships, presented by Kona Longboard Island Lager, is set to celebrate its 17th anniversary on Sunday, July 28, 2013. M2O has grown from a grassroots challenge for the legendary lifeguards and watermen of Oahu to the premiere event for the sport of paddleboarding, annually crowning world champions in the two disciplines of traditional (prone) and stand-up paddleboarding (SUP). The fastest athletes complete the crossing in approximately four and a half hours, which begins on Kaluakoi Beach on the north shore of Molokai and finishes in Maunalua Bay on the south shore of Oahu.