This year, the paddling world will be able track athletes live during the race through GPS athlete tracking powered by DotVision at Molokai2Oahu.com. Paddleboarding fans can also get live race day updates on Facebook, Twitter, and Google+ all found at Molokai2Oahu. 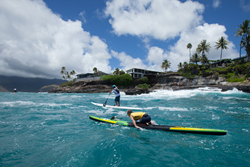 Mentally and physically, it’s (Molokai2Oahu) the hardest race in the world. It truly tests your spirit and will help you discover what you’re made of. - Kai Lenny

The desire to cross the ocean between two islands is rooted in the history of ancient Polynesian explorers. The thrill of adventure and the anticipation of a great challenge experienced by paddlers generations ago make up the common thread that runs through today’s athletes who compete in the Moloka’i-2-O’ahu Paddleboard World Championships (M2O), presented by Kona Longboard Island Lager. On Sunday, July 27, 2014, hundreds of paddlers from around the world will gather on the shores of Moloka’i with their sights set on the island of O’ahu, ready to take on the Ka’iwi Channel.

For every athlete, M2O is the ultimate test of paddling skill, strength, and mental toughness played out on one of the most beautiful and powerful bodies of water on the planet. Each stroke along the 32-mile journey produces a unique result for each paddler and for some, an opportunity to achieve the extraordinary.

This year, the world’s fastest growing water sport sets the stage for gripping competition in the stand-up paddleboard division. The traditional paddleboard division could see one woman set an unprecedented record at the young age of 20, while a new champion will be crowned on the men’s side as the former champ steps aside. Surfing legends return to the Ka’iwi Channel – one with a chance at victory, and one to relive the experience of crossing the channel 13 years ago. A trailblazer in women’s paddling returns to competition. And, amidst all the action, one man quietly builds on a legacy that will forever remain untouchable.

Last year, race results were impacted by navigational strategies. One strategy was to take a southerly route toward O’ahu in an effort to minimize the effects of a falling tide that pulled against every racer. Another was to take the shortest distance between two points and set a course along the rhumb line. In the end, the straightest line won the day.

Travis Grant is back to defend his hard fought victory last year in the unlimited stand-up paddleboard (SUP) division. The 31-year-old Australian surprised race fans who were focused on a battle between the sport’s top American paddlers, Kai Lenny and Connor Baxter. Grant slipped across the finish line in a time of 4 hours, 50 minute, 12 seconds. This year, he leads what will again be the most hotly contested race at M2O, driven by famous Maui downwind experts.

With a renewed sense of focus, both Lenny, 21, and Baxter, 19, return to improve upon their unexpected results from 2013. The Maui paddlers where included on the list of victims who chose the slower southerly route, trying to gain an edge over the falling tide. Lenny is chasing his first victory in the unlimited division at M2O after winning the stock category in 2012 (4:22:13), finishing third overall. Baxter, the course record holder (4:13:26), seeks his third championship after a recent first-place training run at the Maui-2-Molokai race.

After what seemed to be retirement from the solo SUP race, legendary big wave surfer Dave Kalama is back. Kalama is in outstanding race condition and is looking to reclaim his title from 2010 (4:54:15) before his 50th birthday this year.

Scott Gamble, 37, from O’ahu returns after finishing second last year (5:00:53). This will be the sixth solo SUP crossing for the talented race veteran.

Kody Kerbox, 20, from Maui, is making his debut in the unlimited category and could be a contender after a strong second-place finish last year in the stock category (5:26:21) and a respectable finish at the Maui-2-Molokai race.

The women’s SUP division will depart the start line without its current champion, Australian Terrene Black. However, the race will be no less competitive with the spoils likely shared among three past champions.

Leading the charge are Hawaii’s Andrea Moller, Jenny Kalmbach, and Talia Gangini-Decoite. At 34, the Brazilian born Moller is in position to capture her third championship. Kalmbach, 30, won in 2009 and nearly added to that victory last year, but was edged out by Black to finish second in 5:45:22. Under favorable conditions, Gangini-Decoite, 21, set the course record in her 2012 victory (4:55:12).

The stock SUP race will likely come down to a battle between the 2013 winner Travis Baptiste, 17, from Maui, and the former stock record holder from O’ahu, 28-year-old Andew Logreco.

She already holds the women’s course record (5:22:31), which she set in 2011 during her attempt at the age of 17. This accomplishment makes her the youngest champion in the prone division to win in their first outing.

Now, at the age of 20, Australia’s Jordan Mercer could set the record for the most consecutive wins of any woman at M2O. For the past three years, Mercer won each race by more than an average of 16 minutes over her closest competition. Under tough conditions, she won by nearly 30 minutes in 2013. This year, it seems she will once again have only the Ka’iwi Channel a challenger in her bid to create an indelible mark on these world championships.

After repeat victories at M2O in 2012 and ‘13, Australian paddler Brad Gaul seemed unbeatable. Yet, in 2014 he has decided to step aside to paddle in a two-man team with legendary Australian surfer and friend Tom Carroll. Carroll, 53, paddled M2O with his brother Nick 13 years ago. It is rumored Carroll caught a wave in mid-channel large enough to allow him to stand up on his prone board and surf.

Gaul’s departure from the esteemed solo race makes room for a new champion, which will likely be realized by one of his countrymen.

Australia’s Matt Poole, 26, is the odds-on favorite. Poole furnished one of the best results for a new paddler at M2O last year, finishing third in his second solo attempt (5:11:09). Aside from winning, Poole inherits the responsibility of maintaining the Australian legacy of victories that has gone unbroken for 12 years. Known as the decade of dominance, this string of wins was pioneered by 10-time champion Jamie Mitchell in 2002 and continued by Gaul into 2013.

The Australian insurance policy for top honors will be endorsed by Rory Chapman, 24, who finished sixth last year (5:28:10).

Kanesa Duncan-Seraphin will log her 416th mile in competition at M2O. She is a trailblazer in women’s paddleboarding, having claimed eight world championship titles at M2O. After taking a year off from competition to become a new mother, the winningest woman in race history returns for her 13th crossing.

In the stock category, the men’s race will once again take shape around the head-to-head battle between Los Angeles paddler Jack Bark, 20, and Australian Zeb Walsh, 31. The two are evenly matched. Bark won in 2012 (5:28:16), with Walsh just a minute behind. Last year, Walsh came out on top, winning in a time of 5:46:13, with Bark trailing by six minutes.

Enter 18-year-old Australian Lachie Lansdown and the men’s stock prone race could get even more interesting. M2O race founder Mike Takahashi said Lansdown has a strong paddling style that reminds him of 10-time champion Jamie Mitchell. This will be Lansdown’s first solo attempt.

The women’s stock prone race will be led by Coronado, California lifeguard Carter Graves. At 21, Graves won the 2013 Catalina Classic. This is Graves’ first attempt at M2O.

Matt Sack is humble for a guy who made his career as a North Shore lifeguard, saving people caught in powerful surf. He is equally humble about the record he has established over the past 18 years. At 43, the traditional stock paddleboarder has finished M2O every year since the race’s inception. Sack has never won M2O, but that’s not what drives the surfer who arrived in Hawai’i from Orange County, California the day after his 18th birthday, heeding his mother’s rule that he be an adult before chasing his dream of living and surfing on the islands. After being introduced to paddleboarding by legendary Waimea surfer and M2O icon Clark Abbey, Sack will complete his 18th race this year, en route to his goal of 20 straight crossings as part of world championship history. He will log more than 640 miles along the way.

ABOUT THE MOLOKA'I-2-O'AHU PADDLEBOARD WORLD CHAMPIONSHIPS:

The 18th edition of the Moloka’i-2-O’ahu Paddleboard World Championships (M2O), presented by Kona Longboard Island Lager, is set for Sunday, July 27, 2014. Founded in 1997, M2O has grown from a grassroots challenge for the legendary lifeguards of O’ahu to the premiere event in the sport of paddleboarding. The race annually crowns world champions in the two disciplines of traditional (prone) and stand-up (SUP) paddleboarding. Connecting the islands of Moloka’i and O’ahu, the 32-mile race crosses the Ka’iwi Channel, also known as the Moloka’i Channel. Men and women from 20 countries will face strong currents as they navigate the fastest downwind-route over one of the most beautiful and powerful channels in the world. Top athletes can complete the crossing in less than five hours, riding mid-channel waves that crest more than 12 feet and carry paddlers hundreds of meters. M2O starts on Kaluakoi Beach on the north shore of Molokai and finishes in Maunalua Bay on the south shore of O’ahu. The annual race is a deeply personal experience, challenging every paddler’s physical and mental endurance. Every finisher experiences an individual championship.