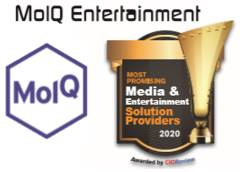 Ms. Klein set off four years ago, on a mission to conquer the online media streaming space with breakthrough technology and founded MolQ Entertainment, Inc. a US-based technology and entertainment company which has continued to attract a talented and expert team to execute her vision.

“We are bringing new impactful content to our subscribers,” says Ms. Klein, CEO and Founder of MolQ Entertainment. “Unlike other online streaming platforms, we aim to bring a wide variety of independent films, original movies, documentaries, original series, and TV networks which are state of the art in terms of the narrative, cinematography, performances, content and experiences that our research has affirmed subscribers globally would love to watch.”

The company combines the best of the Netflix content model (without the cash burn of expensive content) and the TV networks model all in one streaming app platform, so viewers have more choice to watch quality new content than ever before.

MolQ Entertainment has chosen Verizon Digital Media as their Content Delivery Network (CDN) provider to stream MolQ Films content to their global audience. MolQ Films will launch in the EU in 4Q 2020 and in the U.S. in 3Q 2021.