Cultural events expected to draw more than half a million attendees 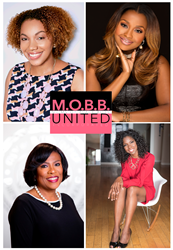 Our goal is to raise awareness of our critical efforts to embrace, elevate and encourage Black boys and men. - Depelsha McGruder, M.O.B.B. United, Founder and President

In an effort to raise awareness about its mission to elevate positive images of Black boys and men while supporting moms of Black sons, M.O.B.B. United, the non-profit organization is ecstatic to welcome its newest ambassador and advocate, Actress Nicki Micheaux, who portrays “Sandra Thompson,” the mother of an unarmed African-American man shot by police on Freeform’s Good Trouble.

In commemoration of its third anniversary, M.O.B.B United will host initiatives at two highly-attended, cultural summer events. The organization will actively connect with women via a variety of dynamic touchpoints.

“Our goal is to raise awareness of our critical efforts to embrace, elevate and encourage Black boys and men. We are so excited to participate and have a presence at two major summer events that will allow us to connect with thousands of mothers, aunts, grandmothers and all women on a personal level, and galvanize the support of M.O.B.B. United, nationwide,” said Depelsha McGruder, M.O.B.B. United founder and president.

The BET Experience is a weekend of events leading up to the Annual BET Awards Show hosted at the Microsoft Theater in Los Angeles, California, June 20-23, 2019. M.O.B.B. United will have a presence at the following events:

The 25th Anniversary of the ESSENCE Festival will be hosted July 5-7, 2019 in New Orleans, Louisiana. The ultimate celebration of black culture is anticipated to draw more than half a million attendees. M.O.B.B. United will:

"Nothing is more important in my life than being a Mother to two amazing sons. For this, and so many other reasons, I am humbled and honored to be recognized by Moms of Black Boys United for lifting up women who are the cornerstone of our communities. Moments like this keep me inspired and I look forward to being a part of this special event,” said Parks.