Research teams at South Dakota School of Mines & Technology comprised of undergraduate and graduate students and lead by Kevin Ward, Ph.D., have deployed seismometer arrays at a fault zone in Alaska and a volcano in California. The data returned could give new insights to what’s happening under these geologically active areas. 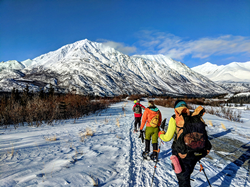 This helps us see if there is a magma chamber under this volcano, and that helps us determine risk.

On a cold February morning, just off the only highway adjacent to Alaska’s Denali National Park, Kevin Ward, Ph.D., and a group of students dig into the snow with shovels and ice axes. Once they reach the ground, the team places a small instrument into the frozen tundra. The sensor is about the size of a coffee can – but with a spike poking out of the bottom. After the sensor is set and covered with snow, the team drives about a half-mile and repeats the process. These researchers will place 400 of these devices over the next several days.

The array of seismometers they’re deploying along about 190 miles of the Denali Fault will detect tiny movements in the earth’s crust. By analyzing the seismic waves captured by these devices, the scientists can map the underground structure of this area. The data this team recovers will give a more detailed view than ever before of what’s happening along this section of the Denali Fault.

“People have done this in the past with earlier generation seismometers. But these new instruments give much higher resolution of what’s going on underground,” says Ward, an assistant professor of geology and geological engineering at South Dakota School of Mines & Technology.

The kind of detailed analysis can be very useful for those who want to understand earthquakes. The Denali Fault is among the most active in the United States. In 2002, this fault produced a 7.9 magnitude earthquake felt as far south as Seattle. But the area Ward and his team are investigating didn’t move in that earthquake, and this kind of research can give clues into when this part of the fault might see movement in the future. The team is now analyzing the data and piecing together a 3D image showing the structure of the fault, which can help determine the future earthquake potential.

Seismometer arrays can reveal more than potential earthquakes. They can also help researchers understand what’s happening beneath volcanoes. Ward and his team deployed an array of 85 seismometers across about six square miles of the Lassen Volcano National Park in California. The data they’re getting back provides a window below the volcano. Lassen last erupted about 100 years ago and this sort of detailed imaging below this surface has never been done. “This helps us see if there is a magma chamber under this volcano, and that helps us determine risk,” says Ward.

There is also a vigorous hydrothermal system of fumaroles, steaming ground and boiling mudpots around Lassen. “There is very clearly a shallow heat source that’s heating this water, so we may be able to see some of these hydrothermal features, learn something about the plumbing, or the actual source of the heating,” says Ward.

Ward’s next proposed project is to put out about 1,000 seismometers along the Cascadian Subduction Zone in the Pacific Northwest for 40 days in the summer of 2020. “This would help in the understanding of the subduction zone changes from Northern California to Washington.”

The oil and gas industry has used these kind of seismometer arrays for the past two decades in the hunt for new resources and reserves. It’s only in the last five years they have been more widely used by the academic community to better understand what’s going on in underground volcanic zones and earthquake prone areas. “It’s really just a new application of older technology,” says Ward.