The International Association of Registered Financial Consultants (IARFC®) has named Monroe “Roey” Diefendorf, Jr., RFC® as the Loren Dunton Lifetime Achievement Award recipient for 2021 in recognition of one who has made substantial contribution to the financial services profession and the financial interests of the public. With a career covering 50 years of service, Monroe continues to embrace Loren Dunton’s philosophy in every aspect of dedication and zeal! 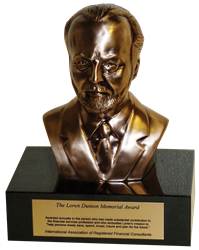 Loren Dunton was a man of great vision and to have my name mentioned in the same sentence is humbling... Monroe "Roey" Diefendorf, JR., RFC®

Generally regarded as the “Father of Financial Planning”, Loren Dunton organized financial professionals in the late sixties and with their help created the financial planning movement. Dunton developed associations, magazines, colleges, university programs and foundations. He used his experiences to frankly explain what all financial advisors now recognize - that the ethical sales of financial products and the delivery of competent advice is a noble calling. Loren Dunton was a man of vision who cared deeply about both financial consultants and consumers. The Loren Dunton Lifetime Achievement Award was first conferred in 2000 at the IARFC Financial Advisors Forum. The selection committee has strived to honor consultants who have demonstrated effectiveness in carrying the message of responsible financial stewardship to the public, and have high ethical and professional standards.

In his years of service, Monroe has manifested Loren’s philosophy through his financial services enterprises, his books and articles, his presentations at industry conferences, an abundance of award recognitions, and by his continued educational endeavors aimed at the rising generation of financial consultants in college curriculums.

In receiving the award Monroe states, “Loren Dunton was a man of great vision and to have my name mentioned in the same sentence is humbling. As a fourth generation Consultant, at an early age I understood the noble calling that we have as RFCs. I am so honored to accept this Lifetime Achievement Award, but for me this is not about getting a pot of gold at the end of the rainbow. It is truly the very beginning of the responsibilities that also go along with my acceptance of this award. The responsibility to cast a vision for the RFCs of today and those who will join our ranks in the future. Thank you, IARFC.”

In his personal life, family and sharing his blessings are foremost. On his list of philanthropic endeavors, most notable is his Family Foundation supporting a school in Zambia, East Africa that educates and feeds 250 children daily. Monroe figures he and his family have made over 43 combined trips over the years to the mission school to oversee the foundation’s work.

“In my opinion, those who have received the Dunton Award have over achieved in their professional career,” explained IARFC Trustee Chair and CEO, H. Stephen Bailey, Ph.D., MRFC®. “Moreover, they face outward and dedicate their time and energy to others in the profession and to the public. Roey has a lifetime of giving back.”

The official virtual presentation of the Loren Dunton Lifetime Achievement Award will be on April 20, during the IARFC April Awards Month. Highlights of Diefendorf’s contributions to the financial industry will be acknowledged as dedication to his life’s work.

For additional information on the IARFC and the Loren Dunton Lifetime Achievement Award visit the IARFC website.