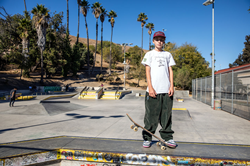 Contested for the first time this year, Global AMdemic is an all-video skateboarding competition presented by Skatepark of Tampa (SPoT) with support from Monster Energy. After this year’s Tampa Am contest was cancelled due to the Covid-19 pandemic, SPoT moved to a digital format to host an event with global participation. Global AMdemic 2020 was open and free to enter for amateur skateboarders from all over the world. Participants were asked to film their best 60-second runs at the street spot or skatepark of their choice between September 1 and 30. All entries posted on Instagram with hashtag #GlobalAMdemic were judged by a panel of skateboard experts.

On November 12, the winning skateboarders were announced in a special Skatepark of Tampa (SPoT) live webcast. The 90-minute show was hosted by Paul Zitzer and Andrew Cannon and featured commentary from official judges Kelly Hart, Mike Sinclair, and Monster Energy athlete Kelvin Hoefler from Brazil. Viewers can watch the Global AMdemic 2020 finals show here and the Semi-Finals broadcast here.

Prior to the finals, the judges had scored over 500 video entries from across the world before choosing 30 semi-finalists. In a web broadcast on October 9, the SPoT team narrowed the field to the final 12 skaters, who were then received an October 30 deadline to each film a new 60-second final run.

When all was said and done, Monster Army recruit Mota convinced the judges with a stacked winning run filmed at Chevy Chase Park in Los Angeles: Starting off with a kickflip backside Smith Grind the rail, Mota connected backside 180 heelflip over the kicker, Halfcab heelflip noseslide the ledge, kickflip backside tailslide the tall Hubba ledge, blunt kickflip fakie the quarter pipe, Caballerial heelflip the hip, backside 180 kickflip up the Euro Gap, and a big flip frontside boardslide shove-it down the rail as the final banger for a 97.00-point score and first place.

Over the past years, Mota has emerged as part of a new generation of Brazilian skateboarding talent. At the mere age of 9 in 2016, Mota dropped his first full-length part ‘Deemers Essencial’ that put his name on the map. In 2019, he arrived in the U.S. and took third place among the top amateur riders in the Zumiez Best Foot Forward Competition finals. Footage of Mota went viral after the release of a four-minute video skating The Berrics skatepark that has been viewed more than 1.4 million times to date. He also recently appeared in a Monster video edit filmed at Nyjah Huston’s private skatepark.

Viewers can go online and watch the Global AMdemic 2020 finals show on the official SPoT YouTube channel. You can also use the following links for direct access to final runs by Mota, Daiki Ikeda, Keyaki Ike, and Gabriel Fortunato. Congratulations to our riders and thanks to Skatepark of Tampa (SPoT) for hosting this event amid the adversities of the global coronavirus pandemic.